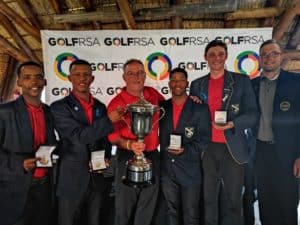 The Golf School of Excellence Cape Town opened with a three-under-par 213 total to lead the field, but Angelo Keffers (70), Jurie Mostert (71) and Keanan Keffers (73) put De Villiers Graaff on the attack with an opening round of 214.

Curro Aurora – targeting their third successive victory – trailed by three shots, but a determined effort from Carl Mwale (72), Van Wyk (72) and Stefano Marchetti (75) for a score of 219 saw the two-time leaders set the clubhouse target on three-over 435.

Meanwhile Mostert fired a two-under 70 and he was backed up by the Keffers brothers.

“Keanan shot 75 and Angelo carded 76 for a total of 221 and that gave us a share of first with Curro Aurora on three-over.” said De Villiers Graaff Golf Academy manager Cobus Boshoff. “Earlier I found our fourth player, Alric Rooi, sitting under a tree. He was absolutely devastated after rounds of 75 and 77 and so despondent that he hadn’t contributed anything to the team. Little did he know that he would be our hero on the day.”

In the event of a tie, the winner is determined by the fourth players’ score in the final round under the terms of competition.

“Our total was 298 with Alric’s final round 77,” Boshoff said. “Their fourth player, Cole Stevens, shot 82 in the final round, which gave them a total of 301. You can bet Alric felt a lot better when he discovered he saved the day for us.”

Boshoff described the victory as a big win for De Villiers Graaff School, and a huge win for golf development.

“We are a very small school with only 345 learners, so winning this for a second time speaks volumes of the success we are achieving at the Golf Academy,” he said.

“Alric, Keanan and Angelo are all members of the South African Golf Development Board. Thanks to funding from the school and Boland Golf Union, they are full-time boarders at the hostel and they work intensively with the coaches from Swingfit.

“These four fine young men are paying back the support they receive in spades, not only winning this title for us a second time, but helping Boland Golf Union to victory in the B-Section at last year’s SA Inter-Provincial.

“This is a huge stage for these young players, and they performed brilliantly under pressure. The course set-up was tough. We had beautiful summer weather, but winter conditions on course. The greens were really fast and they really gave the guys tough pin positions on the last day. Our players compete with basics. They don’t have the newest or best clubs on the market, but they have pure talent. That is what we saw on display here this week and we are incredibly proud of their achievement.”

The Afrikaanse Hoër Seunskool finished third on 441, Balderstone Sports Institute edged out The Golf School of Excellence Cape Town for fourth in a count-out on 443.

The Swellendam golfer edged out Jurie Mostert from De Villiers Graaff, Curro Aurora’s Kieron van Wyk and Yurav Premlall from the Balderstone Sport Institute by one shot with rounds of 72 and 68 to scoop the Individual title on four-under-par 140.