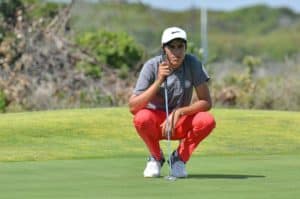 A bogey at the first was not an ideal way to start but the Pecanwood gofler bounced back with a birdie at the second and edged ahead of the field with another gain at the fifth.

A round of three-under-par 69 which was good enough for a two shot triumph over Christopher Bagnall of State Mines.

Fellow GolfRSA National Squad member Carl Mwale got himself in contention on the back nine, but the Eagle Canyon junior came unstuck with dropped shots on the 14th and 17th and fell back into a tie for third on level par with Kian Rose from Royal Johannesburg and Kensington.

De Klerk has been a loyal supporter of the #BridgeJuniorSeries, winning the first of his three series titles at Silver Lakes in March 2018. Last season, he defeated reigning Nomads SA Under-15 champion Rorisang Nkosi in a play-off and this win qualifies De Klerk once again for the Bridge Fund Managers Junior Series North Final, where he will compete for the ultimate prize.

“It is wonderful to Nash qualify for the regional finals of the Bridge Junior Series for the third straight year,” said Paul Stewart, Chief Executive at Bridge Fund Managers. “Hopefully he can reproduce his form at the finals in April 2020 and win the trip to Pinehurst.”

Launched in 2017, the Bridge Junior Series is managed by the SA Golf Development Board and endorsed by GolfRSA. Open to boys and girls in the U13 and U19 divisions, the Series is played across 18 tournaments hosted by leading courses.