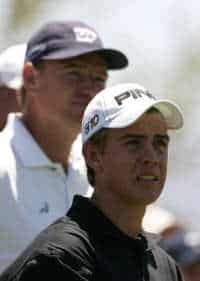 Pearl Valley Golf Estates was not a place for the fainthearted on Thursday as seasoned pros were left shellshocked by gale-force winds at the South African Airways Open. But one amateur rose above the carnage with a remarkable round of 74 that left him in a tie for 18th place and spoke volumes for his talent.

Twenty-year-old Louis de Jager could barely hide his relief after coming through a torrid day with his reputation greatly enhanced.

De Jager was all wide eyes as he teed it off with Ernie Els and he even had the temerity to outscore the four-time champion by three strokes.

“Man, I was nervous on that first hole. I don’t know what was worse, the fear of hitting a freshie or playing with Ernie.

“It was great to play with Ernie, you can learn so much from him,” the Centurion Country Club star said.

“But after the first hole I was fine.”

De Jager, who started on the 10th hole, began with a bogey but he went on to record six straight pars to immediately spring ahead of Els. He came home in a brilliant level-par 36.

The 2007 SA Amateur matchplay and strokeplay champion is now aiming to win the Freddie Tait Trophy for the leading amateur in the South African Airways Open. Local boy Johan du Buisson will have to make up seven strokes to catch De Jager after his 81 on Thursday.

“The leading amateur is something I would like to win, in fact, it’s one of the goals I set for myself coming to Pearl Valley,” De Jager said.

The other amateurs were blown to distraction on Thursday.

Du Buisson was the only other one to remain under double-figures over par as Stellenbosch’s Oliver Bekker (87), Reading Country Club’s Tyrone Ferreira (87), Umdoni Park’s Prinavin Nelson (90) and Randpark’s Ruan Botha (90) all failed to cope with the treacherous conditions.