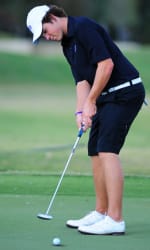 The Limpopo Amateur Open was held at Koro Creek from 9 – 11 July 2010. A total of 157 entries were received and a pre-qualifying round was held the day before the tournament proper began.

The Koro Creek golf course played host to its first tournament of this magnitude since it underwent a redesign and a name change from what used to be called the Nylstroom golf club.

The final 18 holes was played on Sunday and at the end of the day two players, Johan de Beer (Pretoria CC) and Jacques Kruyswijk, a local boy from Euphoria just up the road, were tied on a credible score of 208 (8 under). Johan de Beer who returned from the States after a fairly succesful year of amateur college golf at Texas Christian University eventually lifted the trophy after a holes of sudden death. In the play off de Beer made birdies both times coming up the 18th to the birdie and a par of Kruyswijk.

Bryn Flanagan of Wanderers set a official course record of 66 in the first round and eventually finished in a tie for 3rd place with Francois Coetzee of Centurion, one shot behind the leaders. They were followed by SA National Team Golfer Danie van Tonder two shots further back.