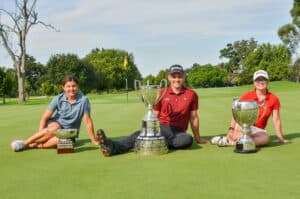 De Beer, a member of the GolfRSA National Squad since 2019, never trailed in his 36-hole final against Franssen and got off to a flying start to be 6-up by the 13th hole, before turning after 18 with a 5-up lead.

Although the damage was likely already done, the Scot fought back hard and reduced the deficit to just two, with five holes to play. A costly bogey on the 33rd hole swung the momentum back in favour of the home player and De Beer was able to hold on for a 4&2 win. 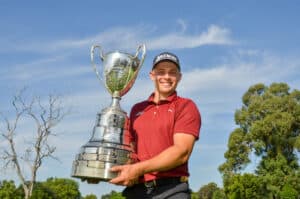 “At the moment I’m really excited and happy, but I doubt that the significance of this moment has really sunk in for me,” the 23-year-old Ernie Els and Fancourt Foundation member explained.

“Even when I went 6-up I knew I couldn’t let my guard down because Rory is a classy player and that he wouldn’t let me enjoy the moment. We expected and planned for a fightback and Rory started playing some incredible golf in the last 18, which made it much easier to focus on the task at hand.

“I must pay tribute to my caddie, Tyler Watts, who was real trooper this week. He helped keep me calm, and in the moment and he kept reminding me to play the golf course and not the man.” 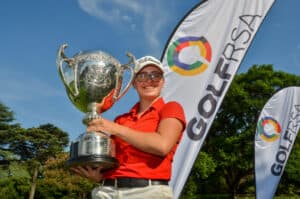 In the women’s championship, unheralded Marine Legantil from Country Club Johannesburg was a surprise winner of the SA Amateur after defeating best friend Kyra van Kan 5 & 3 in their 36-hole final, also on the East Course.

The diminutive 18-year-old knocked out GolfRSA No 3 Gabbi Venter 7 & 6 in the quarter-finals, and advanced to the finals when she edged the newly-crowned SA Women’s Stroke Play champion Kiera Floyd, ranked 2nd in the country.

“I didn’t mind being the underdog,” said the Country Club Johannesburg golfer, who ranked 11th in the country. I just played my game, and I knew I could shoot low and make birdies. It’s clichéd but I took it hole by hole.”

Legentil was down early in her match against Van Kan but racked up seven birdies without conceding a dropped shot over a 21 hole-stretch to race into an unassailable lead.

When the 2020 SA Amateur runner up signed for a bogey on the 33rd hole, the match was over, with Legentil claiming the first major win of her career.

“I came into the tournament with no expectations,” she said. “I knew that I had been working hard and that one day it would pay off, but I never expected it to happen this week.”

To win her first GolfRSA event, Legentil, who finished third in the SA Stroke Play earlier in the week, needed to overcome some big-name players.

Having fallen behind early Legentil, who was born in France and moved to South Africa nine years ago, slowly clawed her way back into the game and her consistent play put pressure on Van Kan.

“I knew we were both going to get tired, so at the start of the second nine I started attacking every pin and tried to build up a margin,” she said.

Fortunately, it went according to plan, although beating her best friend was somewhat bittersweet.

“Kyra and I are close friends,” she said. “In some ways it’s not easy to play against your friends, because you want the best for them. But we both knew someone had to win and that, at the end of the round, we would still be friends.”

Legentil will be heading to the USA later in the year to Columbus State University in Georgia, while De Beer has no immediate plans to turn professional. He will receive an invitation to play in the SA Open, courtesy of his victory, alongside defending champion Danie van Tonder. 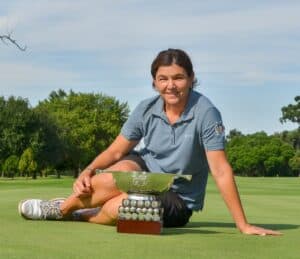 For the first time in the history of this prestigious championship, the title fight came down to a mom and daughter, with former SA Women’s Mid-Amateur champion Liezl Smit facing her 17-year-old youngest daughter Anika in the 18-hole decider.

The 2017 SA Women’s Mid-Amateur champion secured the family bragging rights in the tightly-contested clash when she edged Anika 3 & 2 to lift the title.

“I would have been happy with any result, but I am pleased I got it done first. Now the girls have something to aspire to,” said the 46-year-old pharmacist from Vryheid.

The country’s leading mid-amateur made a fast start with a birdie at the par-5 first and never looked in trouble, but Anika, a member of the GolfRSA National Squad, kept her on her toes all way.

“Anika didn’t give an inch all day and she played some of the best golf I’ve seen her play. I had to draw on all my experience to get the job done,” Smit said.

“This has been an incredible opportunity for both of us, and we will treasure the memories of this week. Anika gained so much experience this week, and it will certainly help her to take her game to the next level. It was a win-win for both of us.

Smit said the family will definitely be back next year, but she doesn’t plan to defend her title.

“We are making it our goal to finish in the top 32 in next year’s SA Women’s Stroke Play Championship, so we can tee it up in the Championship Division in the SA Women’s Amateur. It’s a goal we both embrace, and we are going to work hard to make it happen.”

“We just love the vibe at this event, with the men and women’s championships played concurrently. Playing at two of the best and most challenging courses in the country is fantastic, and the tournament itself is at another level. The standard of golf produced in this week is top notch and it’s such a festival of golf for the golf fans, being able to support both the women and men.”

The men move on to the next stop on the 2020 South African Swing, the African Amateur Stroke Play Championship at Leopard Creek, which tees off from 14-17 February.

The series concludes with the SA Stroke Play Championship, hosted by Randpark Golf Club for a third successive year, from 21-24 February.