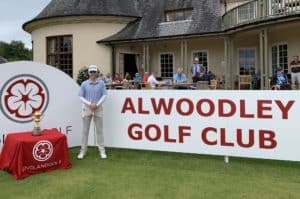 After earlier rounds of 75 and 71, De Beer surged into the top 20 with a four-under-par 67 on moving day at the Alwoodley Golf Club. A final round 68 netted the Ernie Els and Fancourt Foundation member a share of fifth on three-under 281.

The 16-year-old Yorkshire golfer, who won by five shots, became the youngest-ever winner of the prestigious championship, pipping Major winners Sandy Lyle, who were respectively 17 and 18 when they won the English Men’s Open Amateur Stroke Play.

De Beer reeled in four birdies on the outward loop and he offset a bogey at 12 with a birdie at the par four 16th.

“Unfortunately I finished with a bogey, but that’s golf and you have to take the good with the bad,” said the 21-year-old Port Elizabeth golfer. “The wind got up early on and the conditions were tough. We had a few downpours as well, which made it interesting.

“I made a great start with birdies at five, six, seven and eight and went around the turn four-under. At the 12th I made a silly mistake and paid with a bogey. When I put my putter down, I wobbled over it. I didn’t take my time over the putt the second time, and missed.

“I’m really happy with the way I finished, because this result earned me some much needed world golf ranking points and I’m at the top of the reserve list for the St Andrews Links Trophy. I’ve had a great time with the GolfRSA National Squad guys here in Leeds, so I really hope I make the field at St Andrews next week.”

Bloemfontein’s Nienaber also reeled in four birdies in his outward loop, but gave three shots back before a final birdie at the par four 16th saw him sign off with a final round 69. He finished in tie for 28th on two-over 286.

“I really started well and I turned four-under, but I lost momentum when I three-putted the 10th and had silly drops at 11 and 12. I dropped another shot at 15, but birdied 16 and made pars at the last two holes,” said the 19-year-old.

“I’m not too happy with the result, but I’ll take it. I’m must happier with my ball striking than I was at the start of the week and I feel good about the game I’m taking to St Andrews.”

“It was a disappointing day with the putter,” said the 20-year-old from Milnerton. “I had four or five three-putts and you can’t afford to be scrambling for pars when the conditions were as tough as we had it. The putter really hurt me. I was two over through the first six holes and I got on a bogey train with drops 10. 11. 13. 15 and 16. It really wasn’t great.

“My ball striking is really good, though, so I’m keeping a positive mind-set and I’ll just do some hard graft with the putter before St Andrews.”

The St Andrews Links Trophy tees off from 7 to 9 June. A group of 11 GolfRSA National Squad players will feature in the 144-strong player field, striving to become the first South African winner of this highly-ranked championship.