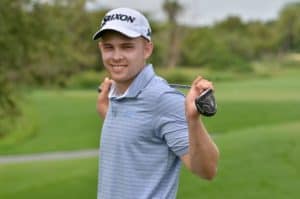 7 August 2019 – The sun has risen dramatically over Kyle de Beer’s golf career in the last 12 months and his emergent dominance was punctuated by a seven-shot stroke victory in the Border Stroke Play in July that shot the Port Elizabeth golfer to fourth in the GolfRSA Open Amateur Rankings.

A little digging into his steady escalation revealed a rather controversial decision De Beer took during his final year at St Dominic Priory High School.

“I faced the choice of college golf in the USA or staying at home. And I chose to stay home, which wasn’t the popular choice,” said the 21-year-old Ernie Els and Fancourt Foundation member.

“I took the allure of college golf out of the picture and I took a realistic look at my own game. I had worked really hard on my game with my coach, Graeme Whale, and I was happy with the progress we made.

“However, I wasn’t convinced that my game was good enough to take to America. So I chatted to a lot of guys who taken that route. I was surprised by how many of them said college golf is not all it’s cracked up to be.

“You get taken in with the glamour of playing the collegiate circuit, but the reality is that you have to adapt to the American way. You have no support structure and you end up making all the sacrifices. And I definitely didn’t want some foreign coach messing with my game.

“I decided it would be more beneficial to my long-term career to stay at home and study here while working with Graeme. And to look for opportunities to gain experience and world ranking points.”

The decision has taken De Beer to greater heights than he imaged.

In 2017, the Nelson Mandela University student led the South African Universities team to a tie for seventh in the 21-stronge line-up of the golf competition at the 29th Summer Universiade in Taiwan. He clocked an 18th place finish in the individual competition with rounds of 75, 73 and 69 at the Sunrise Golf and Country Club.

Last year, De Beer tied for sixth in the FISU World University Golf Championship in the Philippines, guiding the South African University team to seventh place in the team competition with rounds of 73, 70, 74 and 69 at Pradera Verde Golf Club. 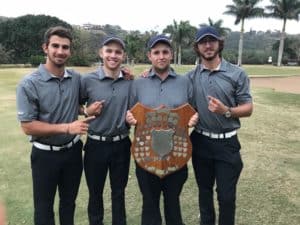 The victorious Madibaz-team at the 2018 USSA Golf Championship.

The third-year Human Movement Science student also led the Madibaz team to victory in his debut at the USSA Golf Championship in 2018.

At the testing East London layout last month, De Beer opened with rounds of 65 and 69 and fired a flawless 64 in the final round to triumph on 21-under-par 198, edging out South African’s reigning number one Jayden Schaper and Dean Martin, who opted for the US College route and attended Troy University.

And it wasn’t the first time he upstaged South Africa’s top talents.

He used a student bursary from the R&A to travel to the United Kingdom in June, where he teed it up alongside the top three ranked amateurs in South Africa at the time – Schaper, Luca Filippi and Wilco Nienaber – in the Brabazon Trophy at the Alwoody Golf Club.

“I was well out of my comfort zone, but I liked the course from the onset,” De Beer said.

“It’s a heavily tree-lined layout and very tight, but it suited my game. I had the bad side of the draw in the first two rounds, with bitterly cold wind and sweeping rain. I shot rounds of 75 and 71 to make the cut on the number, but I found my stride on day three.”

He cracked the top 20 with a four-under-par 67 on moving day and a final round 68 earned him a share of fifth on three-under 281 – and a guaranteed start in the prestigious St Andrews Links Trophy the next week. 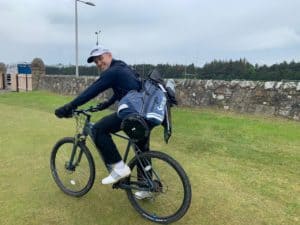 “Playing St Andrews was huge. Friends of ours offered me accommodation and a bicycle and it was almost surreal driving around St Andrews on my way to the course. I didn’t perform as well as I had hoped for. The cut was to the top 40, and I shot rounds of 70 and 72 to miss by one.

“But the experience was amazing. The GolfRSA National Squad guys adopted me on the trip over and I relished the chance to experience two great events with fellow South Africans. We were like little kids at Christmas standing on the Swilken Bridge on the Old Course. It’s was an experience I will treasure forever.”

Does he have any regrets about his decision to forego the collegiate experience?

“My game is at the highest level it’s ever been, I’m getting a first-class education at Nelson Mandela University and I’ve had some great opportunities to advance, both at home and abroad,” De Beer said.

“The top five in the Brabazon Trophy was a huge personal achievement for me, but you know, shooting 62 to win the EP-Border Stroke Play in April rates right up there, as well. Staying at home was definitely the right choice for me. And I still have about six or seven provincial events left this season to try and improve in my ranking. There is so much to play for still. A chance to play the SA Open next year and earn national colours. I really have no regrets at all.”