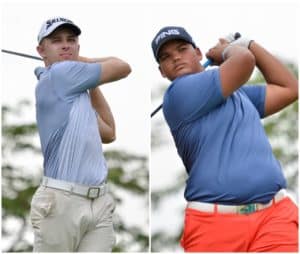 Kyle de Beer from Eastern Province and Southern Cape junior Jordan Duminy have been named to the GolfRSA Protea team that will hunt South Africa’s ninth successive title in the All Africa Golf Team Championship with Jayden Schaper and Martin Vorster at Mont Choisy Le Golf in Mauritius from 8-11 October; credit GolfRSA.

“We currently have an amazing depth of talent in our amateur pool in South Africa and this leaves us in the incredibly fortunate position to give a number of upcoming golfers the opportunity to travel abroad and gain invaluable experience rubbing shoulders with top international competition,” said South African Golf Association President Naadir Agherdien.

“Kyle and Jordan will debut for the GolfRSA Proteas in the All Africa Golf Team Championship in Mauritius in October and Martin and Sam will fly the flag for South Africa in the prestigious biennial Spirit International in November.”

“The All Africa Golf Team Championship is undoubtedly one of the most esteemed teams’ event in Africa” Agherdien said. “We are very proud of our record in this tournament and the team is determined to continue the legacy as we hunt our ninth successive title at Mont Choisy Le Golf from 8-11 October.

“Jayden led the GolfRSA Protea team to a successful title defence in the 25th Africa Region 5 Golf Tournament in Namibia earlier this year and he is joining us fresh from his victory in the Junior Players Championship at TPC Sawgrass, where Martin finished joint seventh.

“Kyle and Jordan both distinguish themselves abroad in the Brabazon Trophy and The Amateur Championship respectively and have enjoyed success on local soil this season. Kyle has rapidly ascended to number two in the Open Amateur Rankings with seven top 10 finishes in his last eight starts, including victories in the Eastern Province/Border Stroke Play and the Border Stroke Play.

“Jordan won the Nomads SA Boys Under-17 Championship and has shown maturity well beyond his 16 years as he wet his feet on the Open Amateur circuit. He reached the final in the SA Amateur Championship and recently converted top three finishes in the Boland and Western Province Stroke Play with his provincial breakthrough in the Southern Cape Open.”

Agherdien will also accompany Vorster and Simpson to the United States, where the pair will represent South Africa in the biennial Spirit International at Whispering Pines from 7 to 9 November.

“The Spirit International is played in alternate years to the World Amateur Team Championship and is always a tightly-contested affair,” Agherdien said. “The invitation-only event has 80 participants from 20 countries, representing six continents. Most of the participants are the highest ranked players from each country or national champions.”

Vorster boosted his international winning tally to five with his first senior triumph in the East of Ireland Open Amateur before he led the GolfRSA Junior Proteas to victory in the Toyota Junior Golf World Cup in Japan. The Southern Cape golfer has also performed well on the local circuit, rising to third in the Open Amateur rankings following victories in the Western Province Amateur and Limpopo Stroke Play.

Simpson broke through for his first Open Amateur success in the Bobby Locke Trophy late last year and backed this up with top 10 finishes in the SA Stroke Play and Southern Cape Open before notching his second title in the Boland Amateur Stroke Play,” Agherdien said.

“Sam was also the individual winner in Japan. Both juniors gained significant experience during the GolfRSA National Squad Tour to Great Britain and Ireland in June. This will serve them well in such a highly competitive field we have every confidence that Martin and Sam will do us proud.”

In November, De Beer will make his debut alongside Luca Filippi in the highly-rated Juan Carlos Tailhade Cup and Argentine Amateur Championship in Argentina.

“Kyle and Luca have both punched above their weight this season and should do well in the individual competitions and as a team,” he said.

“Both players have represented their respective unions in the Premier SA Inter-Provincial for several years. Luca competed in both events last year. He has a top 10 finish in the weather-affected Argentine Amateur, and combined well with Therion Nel to finish fifth in the Juan Carlos Tailhade team competition.

“Kyle was the leading scorer for the University Sport South African team in the Summer Universiade in 2017 and the World Student Games in 2018 and he led the Madibas to victory in the USSA Golf Championships in 2018.

“Both players are very experienced and we confident that we are sending a very strong and capable side to these top amateur events.”