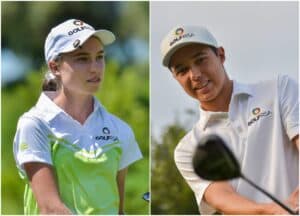 11 April 2022 – GolfRSA National Squad members Fabrizio de Abreu and Kesha Louw have been selected to represent South Africa in the 2022 R&A Junior Open from 11-13 July, ahead of The 150th Open at St Andrews.

The R&A-backed Junior Open Championship will be held at the Monifieth Golf Links, close to the Home of Golf, continuing the tradition of staging the championship at a course near to the host venue for The Open.

Louw will be making her international debut in the prestigious junior event, while it will be a second international appearance for De Abreu this year, following his contribution in the GolfRSA Junior Protea Team’s successful title defence in the All Africa Junior Championship in Egypt last month.

The Junior Open was founded in 1994 and came under The R&A’s administrative umbrella in 2000. It is held biennially, and all golfing nations affiliated to The R&A are invited to enter their best under-16 boy and girl golfers.

“Unfortunately, the 2020 Junior Open was another casualty of the global COVID-19 pandemic, so we are absolutely delighted to see an event of this stature back on the international schedule,” said GolfRSA CEO Grant Hepburn.

“In recent years, the Junior Open has drawn top-ranked juniors from across the globe, and to have our two top-ranked U-16 golfers tee it up in a field of such a high standard is very exciting. In the last few editions, more than 60 nations have participated, giving the juniors not only the opportunity to compete at the highest level, but also to meet their counterparts from many different golfing nations.

“Both juniors are deserving of this opportunity to represent South Africa. Not only has Fabrizio risen to No. 2 in the GolfRSA U-17 Rankings, but in addition to top five finishes in two of his three national junior circuit starts this year, he qualified for the SA Amateur, made the top 30 in the SA Stroke Play Championship and enjoyed top-15 finishes in two top provincial events. 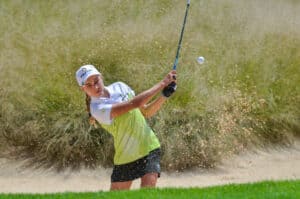 “Kesha came on our radar in 2019 when she won the East London Club Championship as a 12-year-old to qualify for the GolfRSA Champion of Champions. She has really come into her own this year, impressing with a tie for 26th in the SA Women’s Amateur Stroke Play and defeating the country’s No. 1-ranked amateur in the SA Women’s Amateur. A top-four finish in the Nomads SA Girls Rose Bowl Championship last month elevated her to sixth in the GolfRSA Junior Rankings.

“We are excited to offer these two young talents this fantastic opportunity to grow as individuals and to gain invaluable experience on the international stage.” 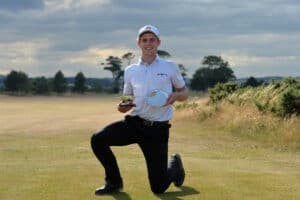 The last champion crowned in the Junior Open was South Africa’s Martin Vorster in 2018 at St Andrews. The GolfRSA National Squad member claimed a one-shot victory at the Eden Course, edging Tsubasa Kajitani from Japan by one shot with rounds 66, 65 and 75 to triumph on five-under-par 205.

“What Martin did in 2018, was incredibly special. In fact, it launched a series of international successes for him. The following year he triumphed in the East of Ireland Amateur Open before he led the GolfRSA Junior Proteas to victory in the Toyota Junior Golf World Cup in Japan,” Hepburn said.

“However, our expectation when sending our juniors abroad is not results driven, but rather to see them make the most of the opportunity to further their careers. We know Kesha and Fabrizio will both embrace this opportunity.

“With international travel so restricted the past two years, many of our juniors have missed out on the opportunity to compete abroad and we are thrilled to give this duo the chance to test themselves against top international competition and build experience.”