Day one of French Test goes to South Africa 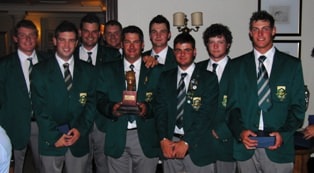 Going into the test match against France, the eight man South African amateur golf team knew the odds were stacked against them. They were regarded the under dogs and their individual performances in preceding weekend’s French Men’s Amateur International Championship did not do much to indicate otherwise.

However by the time the last putt was sunk, in today’s first round, at the Joyenval Golf Club, about twenty kilometres north of Paris, the underdog status had dissipated and the visiting team emerged as serious contenders.

The two teams played four matches in both the morning and afternoon, foursomes and betterball respectively. The morning matches the French dominated, taking 3 points to South Africa’s one. However South Africa dominated the afternoon betterball, winning 3½ points to the home teams ½ point.

South Africa go into tomorrow’s singles with a one point lead; 4½ points to their opponent’s 3½.

“If we can win four singles matches tomorrow we can make history,” enthused South African Golf Association (SAGA) Vice President and Team Manager, Colin Burger. “There is still a long way to go however,” pointed out Burger.

The day started slowly for the South Africans. They lost three of their four foursomes matches, only Dean O’Riley and Tyrone Ryan emerging victorious, against the French pairing of Antonie Schwartz and Mathieu Decottignies-Lafon, 2 and 1.

“The French sent their strongest players out first, which is the opposite to what we normally do in South Africa,” pointed out Burger. The first match, in which Jared Harvey and Aaron Russell faced the two top French players, Romain Wattel and Johann Lopez-Lazaro, found themselves four down after four holes. The French pair blitz the first four holes with birdies that could not be matched. The South Africans eventually lost 5 and 4.

In the afternoon, it was a totally different story.

“We decided to match the French strength for strength and put our top pairing against their top players,” said Burger, speaking in a telephonic interview after the game.

The first pairing of JG Claassen and Ryan Dreyer battled gamely, finding themselves 2 down with five holes to play against Romain Wattel and Johann Lopez-Lazaro of France. “They fought back gamely going down the final hole all square,” said Burger. “Dreyer birdied the last hole to take the first afternoon match point.”

Dean O’Riley and Tyrone Ryan continued their winning ways against Alexandre Levy and Jerome Casanova, two and one.

Danie van Tonder and Johan Bekker finished two up against the French pair of Antonie Schwartz and Mathieu Decottignies-Lafon.

“With five holes to play Aaron Russell and Jared Harvey were two up,” said Burger. Their two French opponents rallied taking the match to all square down the final hole. According to Burger, both teams birdied the final hole to end up all square. The half point France earned in this match was their only points for the home team from the afternoon matches.

Wednesday the teams play singles against each other which will determine whether or not the South Africans can make history. Judging by this afternoon’s performances a win does not seem such a far-fetched possibility.