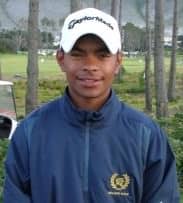 The former Ernie Els & Fancourt Foundation member participated in the Sunshine Tour’s Vusi Ngubeni Development Stroke Play, which was played at Observatory Golf Club in Johannesburg last week. Davidse recorded rounds of 73 and 66 to finish the 36 hole tournament on 139, five under par. He finished second tie, with two other players. He was ranked second on his own after a scorecard countout, which was based on the final round scores.

“In the final round, I played the back nine in 29,” said an excited Davidse. “I am exempt into all the Sunshine Tour tournaments thanks to my second place,” explained former Ernie Els Junior Tour winner. “I will definitely be turning professional towards the end of December. It is my intention to go out there do the best I can and hopefully get some good results,” is how the Bolander explained his plans going forward. Davidse’s playing privileges on the Sunshine Tour apply to the 2009 season, which starts with the Johannesburg Open early in January.

According to the latest SAGA Player Ranking, Keenan Davidse ranked 39th. His best performance this year was 3rd in the Boland Open. He also represented Boland at the SA Inter Provincial.

Another amateur who may join the professional ranks is 23 year old Alphius Kelapile. The tall and talented Leopard Park Golf Club member, from Mafikeng, also played in the Vusi Ngubeni Stroke Play. He recorded rounds of 69 and 77 to finish on 146, two over par. This saw him safely into 9th place, tied with one other player, thereby also gaining exemption on the Sunshine Tour’s smaller tournaments.

“I have not yet decided whether or not I will turn professional,” he explained. The dilemma facing him, as it does most amateurs, is the cost of playing the sport professionally. “I am currently a member of the North West Sport Academy who supports my golf in many ways. If I turn professional I will lose this. Therefore I am weighing up my options and will decide later next month whether I will turn professional, a lot will depend on what form of sponsorship I may be able to secure.”

Kelapile was selected for the national team to play in the Zone VI this year.

According to the latest South African Golf Association Player Rankings Kelapile is ranked 24th, the highest ranked black player. The highlight of his amateur career, other than being awarded national colours, was winning the Western Province Open in April last year.