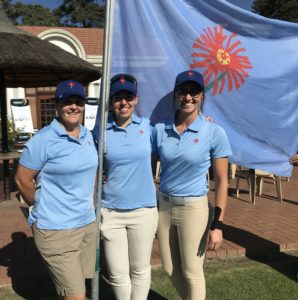 VEREENIGING, 2 June 2019 – Gauteng North A will be chasing successive Swiss Team Trophy titles in the SA Women’s 72-Hole Team Championship, which tees off at Maccauvlei Golf Club from 3-5 June.

The Daisies enjoyed four successive victories from 2010 and made a welcome return to the winner’s circle when they broke a four-year drought in wire-to-wire style at Waterkloof Golf Club last year.

“Gina and Karin are both two very experienced competitors, while Larissa has taken her game to the next level over the last 12 months, competing on the national amateur circuit, the Sunshine Ladies Tour and representing South Africa in the Regional All-Africa Challenge Trophy,” De Wet said.

“I believe they have the depth and experience to pull it through. The players all felt at ease and confident to start the tournament after a great practice round on Sunday.

“The fairways are generous and the greens are rolling very true and at a really nice pace. There are plenty bunkers, so good ball striking and positioning off the tee will be key. There are a couple of tough holes, but enough scoring holes to make this week very interesting.”

Gauteng has also dominated the prestigious team event in the past and the 2016 champion have tripled their chances this year with three teams.

Ekurhuleni and Western Province are fielding two teams each.

Kiera Floyd, who guided Ekurhuleni B to victory in last year’s Challenge Trophy battle, will line up for Ekurhuleni A with Caitlyn Macnab and Nadia van der Westhuizen, while Teagan Lubbe – another member of the winning 2018 B-team – headlines for Ekurhuleni B alongside Kaylan Boshoff and Kyra van Kan.

South Africa’s number one ranked amateur Kaylah Williams will captain Western Province A with Jordan Rothman and Kelly Erasmus in support, while the experienced Vicki Traut will lead Katia Schaff and Annelie Swanepoel into battle for Western Province B.

Four-time SA Women’s Mid-Amateur champion Sandra Winter brings her experience to the Southern Cape A team alongside rising stars Kim de Klerk and Zane Naude, while the reigning champion Liezl Smit will lead KwaZulu-Natal A into battle. Lizzie Currie and Michaela Fletcher, members of the victorious KZN team at Polokwane Golf Club in 2017, complete the line-up.

Megan Streicher, Ineke Brynard and the experienced Bianca Wernich from Boland A complete the A-Division line-up.

The battle for promotion in the Challenge Trophy division will be contested between Border, Eastern Province, Free State, Gauteng North B, KwaZulu-Natal B, Limpopo, Mpumalanga A and B, Northern Cape, North West and Western Province B.