“We knew victory was within our grasp, but even with one hand on the trophy, we were taking no chances,” said Gauteng North captain Gustav Verster.

“We had a 2 point lead over Western Province and Central Gauteng and every guy on the team knew what was at stake. We knew a draw wouldn’t cut it, because we could still lost to Western Province on game points. We had to beat the Lions and every player was committed to the cause.”

Central Gauteng felt the full force of Gauteng North’s determination and banked just half a point in the in morning foursomes.

“It was a good start, but it was not in the bag yet. Central Gauteng has won the SA Mid-Amateur IPT more times than any other team since 2006, because they rule in the singles,” Verster said. “After Western Province beat Ekurhuleni 3 – 1, we knew we needed the win.”

Seasoned campaigner Louis Jonck knocked out rookie Travis Fraser 5 & 4 and Armand van Graan made it 5.5 points for the Daisies when he downed Craig Kamps 3 & 1. Wendell Bossenger defeated Gauteng North number two Lean Boezaart 3 & 2, but the skipper nailed down victory when he beat Rory Garton 2-up.

“Victory was in the bag, but true to the team spirit they had shown all week, the rest of the boys carried on fighting,” said Gauteng North manager Gerry Few.

Danie Viljoen and Louis Moolman both won 2 & 1. Alex van Heerden was 2 down, but won 16 and 17 before he lost 1-down with a bogey on 18th. Jacques van Tonder was dormie 3-down, but also won 16 and 17 to take Central Gauteng number one Ryan Dreyer to the final hole. Van Tonder went first and his putt pulled up three inches short of the hole. Dreyer drained the clutch putt to win 1-up.

“The way our boys fought till the last putt dropped in the final round was a proper show of their commitment to the team,” Few said.

“I am bursting with pride. We started building this team in 2017 and their commitment has been phenomenal. They jumped at the chance to play the course earlier this year and they played four rounds over the weekend to really come to grips with the layout and the wind. The guys practiced like demons to prepare for this tournament and the Most Valuable Player ranking speaks volumes about our team.

“Cameron Johnston and Greg Sheard from Western Province shared the top spot on 11 points, but we had seven players in the top 16, including Alex in third place on 10.5 and Louis and Jacques tied fourth on 9.5.“

Verster said the team’s pairings was a big key to our success.

“We worked really hard to perfect our line-up for the foursomes and it paid off. We scored clean sweeps against KwaZulu-Natal and Free State, we beat Central Gauteng 3.5 – 0.5 and we led 3 – 1 against Western Province, Southern Cape and Ekurhuleni.

“Building that cushion in the morning session takes the pressure off in the singles. This victory was a total team effort. It was amazing to see that as soon as a guy finished his game, he was out there supporting rest of the team. 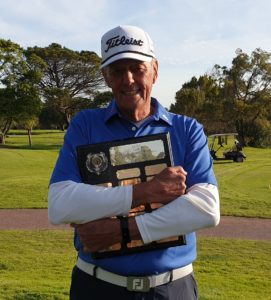 “We had a lot of special moments this week, but seeing our manager hugging the trophy was probably the best one of them all. Gerry has been managing IPT teams at every level for more than three decades and he gave us 110 percent.

“He planned on retiring after this year, but we made him promise to stay if we won and he will definitely be there when we take up our title defence next year. We had incredible support as we prepared for this tournament, so this win is a shout-out to the executive at Gauteng North Golf Union, and all our families.”

Central Gauteng settled for third and KwaZulu-Natal narrowly beat Southern Cape 6.5 – 5.5 to edge Ekurhuleni for fourth place. Free State – promoted last year – held on for sixth place and Southern Cape was sent down to the B-Division after failing to score a single point.