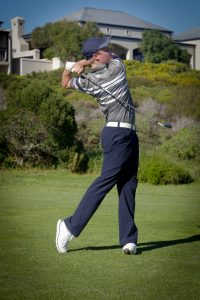 It’s a big day for defending champions Gauteng North, who head into the business end of the week at Atlantic Beach with a spring in their step after their first victory in this year’s SA Challenge Cup.

The Daisies gained two points for a 7.5 – 4.5 result against the Presidents Team in Wednesday’s third round to move into fourth spot on the log, but they will need to bring their A-game and more to their fourth round contest against the championship leaders GolfRSA Juniors today.

The 2015 champions defeated Central Gauteng 8.5 – 3.5 to open up a one point lead over Western Province in the standings after the host union drew 6-all with University Sport South Africa.

Due to heavy fog blanketing the Cape Peninsula on Wednesday morning, play had to be delayed. As a result, the foursomes were cancelled and all matches were halved.

Otto van Buynder burst from the blocks in the singles to beat Presidents Team rookie Cole Stevens 6 & 5 and Etienne J van Rensburg picked up the second point for Gauteng North with a 3 & 1 win over Karabo Mokoena.

Clifford Thompson beat Lwazi Gqira 2 & 1 and Dawid Opperman beat Aneurin Gounden 2-up to hand Gauteng North a 4 – 1 lead, but the final three contests all went down the wire.

Hando Brophy, David Nortje and Kyle de Beer pencilled in the points for USSA, with Altin van der Merwe squaring the match with a superb 6 & 4 win against Elmo Barnard.

In Thursday’s remaining matches, the Presidents Team will be targeting a first win against Western Province, while Central Gauteng faces USSA.