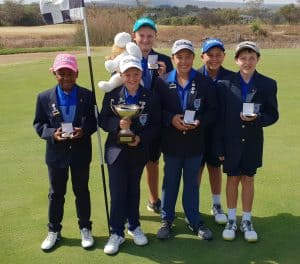 MODIMOLLE, 5 October 2018 – Gauteng North showed huge heart in the face of adversity to celebrate an uncontested runaway victory in the Nomads SA Under-13 Championship at Koro Creek Bushveld Golf Estate on Thursday.

One man down for a second successive day, the five remaining players posted a final round 391 to win by 25 shots from Western Province on a 54-hole team total of 1188.

The Junior Daisies not only lifted the team trophy, but also enjoyed a one-two finish in the Individual Competition. Dujuan Snyman took gold and Fabrizio de Abreu banked silver.

“After we opened with 393 to finish in second, five shots behind North West, we lost William, who went down with bronchitis,” explained team manager Morne Engelbrecht.

“That left us without the luxury of a sixth player for the rest of the tournament, but the team pulled together and dug deep for a second round 404 that took us to the top of the team leaderboard.”

Gauteng North started the final round with a nine shot cushion over Western Province.

“After extremely hot weather on day two, it was really nice to start the final round in cold conditions with a light breeze blowing,” said Engelbrecht. “Watching the players warm up, I saw focus and concentration and I knew we would have a good day.

“Our youngest member, Zinan, carded an 85. Raymond shot 82 and Vian 80 to keep us ahead of Western Province. Fabrizio, who wasn’t quite on form over the first two days, bounced back with a one-over 73 and Dujuan took us to the finish line with a superb one-under 71.

“Every youngster played to the best of their ability on the final day. Watching from a distance, I couldn’t be more proud of the way this team fought for every single shot out there and the way they played for each other to guarantee the win.

“I am incredibly proud of every player who stood up to be counted after William got sick. They didn’t back off from the challenge, but pulled together and showed incredible team spirit and heart. We are really proud to be the new Nomads SA Under-13 champions.

“Thank you to Nomads South Africa for your generosity in hosting an event of this stature to give our young, rising stars a platform to showcase their talent, and to GolfRSA’s David and Bruce Younge, who ran another fantastic event for our juniors.”

Gauteng North junior Dujuan Snyman fired rounds of 71, 78 and 71 at Koro Creek Bushveld Golf Estate to win the Individual Competition at the 2018 Nomads SA Under-13 Championship by five shots on four-over 220; credit GolfRSA.

Snyman carded rounds of 71, 78 and 71 to claim the Individual Competition on four-over 220.

The 11-year-old finished five shots clear of fellow Woodhill junior De Abreu, who registered rounds of 75, 77 and 73. First round leader Janko van der Merwe from North West closed with a 78 to finish in third on his own on 228. Marno Lange from Ekurhuleni took fourth on 230, with fellow Serengeti junior Tyron Groenveld a further two shots adrift in fifth.