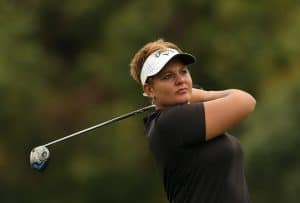 22 May 2018 – Gauteng North A strengthened their bid for Swiss Team Trophy glory with two solid rounds on the second day of the SA Women’s 72-Hole Teams Championship to open up a yawning gap on their closest pursuers.

The home favourites took a five stroke lead into the second day at Waterkloof Golf Club after posting six-under-par 138 in round one.

Larissa du Preez fired a one-over-par 73 and Lenanda van der Walt added a 74 for a second round  three-over 147 that moved the team eight shots clear of Ekurhuleni A.

In the third round, Danielle du Toit shot 73 and Du Preez backed her up with a 75 to keep Gauteng North A in the driver’s seat. The Daisies lead on one-over 433 with Ekurhuleni seven shots back, while the Gauteng A-team finished a further three shots adrift.

Du Toit said the team will keep up the pressure in Wednesday’s final round.

“A seven shot lead is a big margin in a stroke play event, but it’s not a big cushion in a team event,” said the Pretoria Country Club golfer.

“It’s been five years since Gauteng North last won the title, and we want this too much. We won’t rest on our laurels. We have no control over what the other teams will do out there in the final round, so we’ll keep our feet on the gas pedal until we reach the finish line.”

Like most of the competitors in this year’s championship, the Gauteng North team also struggled to come to terms with the greens at the Monument Park layout.

Van der Walt, in particular, was mourning a three-putt at the par five closing hole for par after she hit the green in two in the third round.

“I hit 17 greens in regulation in the morning and made one birdie,” said Van der Walt. “The rest was just a tale of two-putts or lip-outs. It’s like putting on a mirror with slopes. The greens run very true, but difficulty is in getting the pace right. Too hard and it runs past, too soft and it breaks away.

“I was putting for eagle on 18 in the third round and it took me three tries to sink the ball. This course is a real test of patience. You have to keep a lid on your frustration and just move on and keep grinding or it will get to you.” 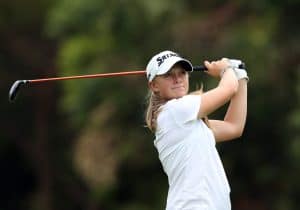 The Ebotse golfer posted rounds of 75 and 71 and team mate Sarah Bouch went around the course in loops of 75 and 76 to keep Ekurhuleni in second place.

“The greens are very tricky and it’s easy to drop a shot or two if you hit it to the wrong spot,” said Macnab. “I felt a lot more comfortable out there in the afternoon and I made a lot more putts. The birdies at 16 and 18 helped to get me to 71, but I still had my fair share of misses. Hopefully we all find our rhythm in the last round, because birdies will win this tournament.”