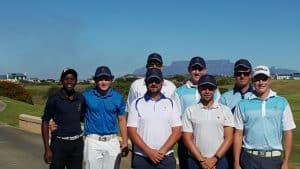 Gauteng North are feeling confident ahead of their title defence at the 15th South African Challenge Cup, which tees off at Atlantic Beach Golf Club from 15-19 May.

“The players enjoyed their first look at the course this morning,” said team manager Paul Davel.

“None of them has played Atlantic Beach before and, as expected, the guys were stunned by the spectacular views from almost every hole. Having had their first tour of the course they are eager to get going against Western Province on Monday.

“Facing the host union on the first day of this year’s competition is a daunting prospect, given their home course advantage, but I think it will be good for the team. Going up against the hosts will get our players into competition mode from the get-go.

“The players loved the course and commented that the fairways are in immaculate condition and the greens are exceptional. For many of them it was their first time on a links-style course and they enjoyed the experience. We didn’t have too much wind, but I think they understand that this course will turn into a beast if the south-westerly wind shows its teeth.”

“The team fought like Trojans until the final putt dropped and we beat Central Gauteng by half a games point in a count-out for the title,” said Davel.

“We literally won by the smallest margin imaginable and I aged about 10 years in the last hour of our final match against the Presidents Team. I think it is a measure of how high the standard of this competition has become that we have celebrated three different winners in the last three years.”

“We lost some of our players to the pro ranks and others are competing abroad, but this gave us the opportunity to let some of our up-and-coming talent shine,” said Davel.

“Everyone except Francois has represented Gauteng North at U-19, U-21 or U-23 level so this event is great experience for them as they try to play their way onto the Premier SA Inter-Provincial team. “Our team might not be the most experienced in this year’s championship, but they are all fiercely competitive individuals and they will never give up the fight. They are confident in their abilities and they have a fantastic team spirit, so I definitely back our boys for our title defence.”

Gauteng North play the University Sport South Africa side in Tuesday’s second round and the Presidents Team in round three. In the fourth round, the team faces the GolfRSA Junior team and they will challenge five-time champions Central Gauteng in Friday’s final round.

The GolfRSA squad chasing a third victory in the team event is packed with national champions that include reigning Sanlam SA Amateur champion Christo Lamprecht, 2017 Nomads SA Boys U-19 Stroke Play and Match play winner Jayden Schaper and Martin Vorster, who won the Nomads SA Boys U-15 title in January and arrived in Cape Town on the back of his KwaZulu-Natal Stroke Play victory at Selborne last weekend.

The Presidents Team will feature Boland’s Neswill Croy, who lines up for a third successive year and Central Gauteng’s Karabo Mokoena and Siyanda Mwandla from KwaZulu-Natal, who made their debut in last year’s event. Aneurin Gounden from KwaZulu-Natal, who competed in 2015, also returns for duty while Keelan Africa from Boland, Central Gauteng’s Cole Stevens, Lwazi Gqira from Eastern Province and Yurav Premlall from Ekurhuleni complete the squad.