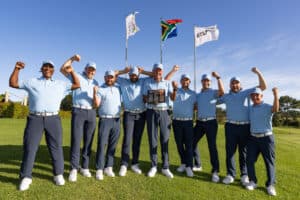 20 October 2022 – While Gauteng North steamrolled their way to A-Section victory in the 2022 SA Mid-Amateur Inter-Provincial in October with dominating performances over the final two days at Devonvale Golf and Wine Estate.

The Daisies hit hard and fast on day one to route Western Province and Eastern Province 8 – 4, but the 2019 champions needed to dig deep on their third day to keep their campaign alive.

“We were pretty chilled on our rest day after that great start against WP and EP but coming back to the course we knew it would be a tough day against Central Gauteng and North West,” said Gauteng North skipper Danie Viljoen.

“Central lost a match on day one, and North West lost one on day two, so we expected both teams to come out firing. The foursomes were tight. We drew against Central and managed to open up a 3 – 1 lead against North West 3 – 1, but we knew they would step it up in the singles.

“We just kept the pressure up and we fought for every point, and we were absolutely thrilled to draw both matches and avoid any losses.”

Ekurhuleni was next on their hit list, and they doled out the punishment, beating the Roses 9.5 – 2.5.

North West, meanwhile, had rebounded after the loss to Western Province.

The 2021 B-Section winners led the A-Section log with 9 points and 37 games points, but Gauteng North and Western Province would begin the final day just 1 point behind.

Knowing that every point counted, the Daisies pummelled Free State 9.5 – 2.5 on the final day to win.

“Western Province also got to 10 points when they beat Central 7 – 5, but we had accumulated 47 games points and managed to pull it through with a 6-point win,” said Gauteng North manager Gerry Few.

The Gauteng North team won three of their foursomes games, and Joe Mnyandu and Louis Jonck halved to secure a tidy 3.5 lead for the side heading into the afternoon session.

Menno Malherbe lost 3 & 2 but Jacques van Tonder beat Pieter Cronje 3 & 2 to keep the Daisies in the driver’s seat. Abrey Barnard and Christopher van der Merwe – at number 2 and 1 – both won 3 & 1 and Viljoen pushed their tally to 7.5.

“Joe squared his game against Lourens Erasmus with a birdie on the 17th but lost 1-down at the last, but Louis won 2-up,” Few said. “Then Paddy (Allardice) birdied 17 and parred the 18th to win 1-up.

“It was great to win the week unbeaten, but for me the team’s final round performance really stood out as the highlight of week. They knew the odds going into the final day. The stakes were high, and I was so proud of the way they fought for every point against Free State.

“The games were tight, especially in the singles, and the guys just never gave up. Their team spirit spoke volumes of the pride in our camp and their commitment to each other and our union.”

The Gauteng North skipper also topped the Most Valuable Player’s list with 11 points, having lost just one singles game. Logan Lofstedt from the Lions was second on 10.5, while Allardice and Van Tonder shared third with Gareth Clements from Central Gauteng on 10 points.

“We fought extremely hard for our promotion last year and it’s gratifying that we were able to keep ourselves in the A-Section this year,” said captain Doug McCabe. “The guys were absolutely awesome, and having led the log after day four, and finishing third, we know we belong.”

Eastern Province avoided the wooden spoon with 2 points from their only victory over Free State, who was sent down to the B-Section after a winless week.