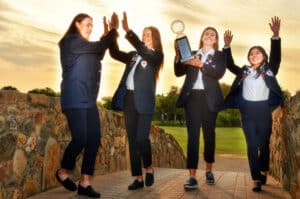 13 October 2022 – Gauteng North rallied to win their first Women’s Inter-Provincial title since 2013 when they edged defending champions Western Province in the final round of matches at Silver Lakes Golf and Wildlife Estate.

After a narrow 1.5 – 2.5 loss to Central Gauteng in the opening round, the Daisies routed Southern Cape 5 – 1 in the second round to reignite their title hopes.

Going into the final round, the mathematics was simple. “We need to beat Western Province and we were counting on Southern Cape to dismiss Central Gauteng,” the Gauteng North A team captain Bronwyn Doeg said.

Thankfully the hosts got both their wishes.

“We knew it wouldn’t be easy and we really needed Southern Cape to play their part, but the team was very determined. Every member on the team knew their role and goal for the day, and all we had to do was manage what we could control and let the chips fall.

“Winning The Women’s Inter Provincial Tournament starts a new era for the Gauteng North Daisies and will motivate us to go from strength to strength.”

Having drawn the morning foursomes session, Zane Kleynhans – who ended the week a perfect six points from six – banked the early point for the Daisies when she beat Kelly Erasmus 6 & 4, but Erica Chen clawed back a point for Western Province when she knocked out Holly Lau 4 & 2.

Rookie Isabella Ferreira was 1-down playing the last against Vicki Traut, but the 18-year-old rookie held her nerve and drained a long-range putt for birdie to halve with the Province skipper. 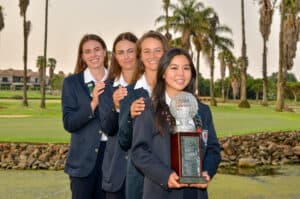 With the score at 2.5-all, the fate of the match was in the hands of Gauteng North captain Bronwyn Doeg and Bobbi Brown.

The game between the recent GolfRSA Proteas teammates was tightly contested. Doeg was 3-up through 12 holes, but Brown rallied to win the 14th and 17th holes.

“Walking down the 18th fairway and seeing the huge home support around the green was awesome,” Doeg said. “The relief when I halved the hole to win was huge.

“Playing on home soil, with our families and supporters out there rooting for us, made it possible for us to step up and rise to victory. The vibe and energy that we had with all the supporters and family really kept us going. This was a real team effort, and everyone put their hand up and delivered.”

Fifteen-year-old Kleynhans topped the Most Valued Players’ List with her perfect score.

Central Gauteng rookie Shannon Berry shared second with Doeg on 5 points, edging out Chen from Western Province by half a point. Traut rounded out the top five with 4 points.

Western Province A and B, winners of the A- and B-Division Seeding Round.

At the start of the week, Western Province A and B had a double reason to celebrate when the two teams scooped victories in the A- and B-Division Stroke Play seeding round respectively.

Western Province A finished on 384, four shots ahead of Gauteng North A in the A-Division qualifier, and the B-team of Hayley Davis (captain), Ashley Huysamen, Tara Nieuwoudt and Anita Chen; Singles closed out a two-shot victory over Mpumalanga A in the B-Division.

Members of the GolfRSA National Squad dominated the Individual Competition.

Brown from Western Province won with a round of four-under-par 68. Next best was Kleynhans with a 70, with Stephanie Barbaglia from Central Gauteng and Southern Cape’s Jasmine Furstenburg tied for third on 74.

Meanwhile Ekurhuleni won the A-Division A-2 Section on a games count-out against KwaZulu-Natal.

Both teams had 5 points following a draw and two wins, but the Ekurhuleni foursome – Kyra van Kan, Lisa Coetser, Candice Wort and Tayla Howroyd – had accumulated 13.5 games points in the matches against KwaZulu-Natal, Boland and Eastern Province and won by 1.5 games points.

Eastern Province was relegated to the B-Division.