Six of SA’s Elite squad come up against each other on the final day of the Pick n Pay SA Women’s Inter-Provincial tournament being played at Paarl Golf Club this week.

Defending Champions Daisies’ team includes squad members Kim Williams, Connie Chen, Hentriette Frylinck and Marne Roos while North West are led by Bertine Strauss and Nicole Becker. As in 2008, these teams face each other on the final day, and the players will recall that in heavy rain, the fixture went down to the last singles match when the Daisies retained the title they had won in 2007.

This year promises to be just as exciting with the same teams level-pegging after the foursomes on day two.

The 2009 event has been played in inclement weather all week but as they teed off in their singles matches on today, the sun came out and the final day should be played in bright Boland spring weather.

The Nolan Karp trophy for the B Inter-Provincial was won by Eastern Cape with Border in second place. Free State and Northern Cape however lead the division at the half-way stage and with former SA junior player Lumien Orton leading Free State’s challenge, they picked up both foursomes points on day two and could present a strong challenge to Eastern Cape in this section. 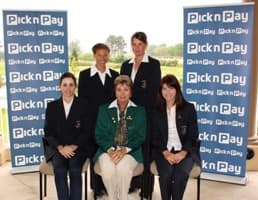