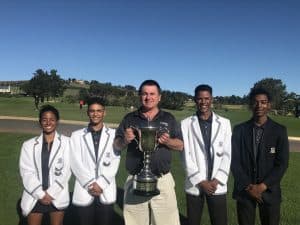 The 2017 champions carried a slender one shot lead into the final round over Afrikaanse Hoër Seunskool Pretoria after setting the first round target at five-under-par 211.

Carl Mwale, Cole Stevens and Kieron van Wyk kept Curro Aurora at the top of the pile with a total of five-over 221. Curro Aurora beat Afrikaanse Hoër Seunskool Pretoria by five shots on a winning total of 432.

Mwale from Eagle Canyon anchored Curro Aurora with an opening 69 and once again led the charge in the final round with an even-par 72.

Fellow South African Golf Development Board members Stevens from Parkview and Ruimsig’s Van Wyk contributed respective rounds of 73 and 76 and the fourth member of the team, Cara Ford from Randpark, posted a non-counting 84.

“Conditions were certainly tougher than in the first round. The course set up was more difficult and the wind made it really hard to break par. Carl, Cole and Kieron, who played on last year’s winning team, were determined to defend the title and bring the trophy back to Curro Aurora. They dug really deep in the final round and their achievement speaks to their commitment to the team. Throughout the tournament they played for, and fed off each other.

“We would like to thank our executive head JC Engelbrecht and our headmaster Dr Richard Kieck for their unwavering support of the golf programme at Curro Aurora. We are also greatly indebted to Central Gauteng Golf Union, in particular Andy Truluck, and to our right-hand man, Hardus van der Merwe, for their continued support.

“A special word of thanks to Eden Thompson and GolfRSA for giving our young golfers the chance to compete in an event of this magnitude. The talent on show this week was really impressive and it was fantastic to see spirit of the sportsmanship among our juniors.

“Congratulations to all the teams who travelled to Boland on a fantastic championship and well done to Affies and Paarl Boys High on finishing in the medals. Hats off to Devonvale for hosting us and giving us an immaculate course to compete on this week.

“Finally, the team and I wish to congratulate Wilco Nienaber, who won the Individual Competition for a second successive year. Wilco is a fantastic ambassador for the sport and leads by example. He is a wonderful inspiration for our juniors, both in his work ethic and his conduct.”

Nienaber from Grey College Secondary fired rounds of 64 and 71 to triumph on nine-under-par 135.