17 year old Connie Chen (Waterkloof) shattered the Umhlali Country Club ladies course record with a sparkling 64 in the second round to win the KZN 2010 Ladies Championship by seven shots on Sunday 28th February.

After the morning round, 18 year old Yushira Budhram (Country Club Johannesburg) was the only player to break par with a two under 69. This put her three clear of defending champion Kim Williams (Centurion), Connie Chen, Nicole Garcia (Ebotse), Kirsten Campbell (Royal Johannesburg & Kensington), and Jena Schonfeld (Glendower), all on 72.

In the afternoon round, with the wind becoming a factor, several of the fancied players fell away, including Budhram. Lumien Orton (Schoeman Park) threatened with a sub par 70 but no one could match the inspired play of Connie Chen, whose round could have been even better had a couple of short putts dropped.

Connie has already represented South Africa on four occasions and only recently returned from playing in the Annika International in Orlando Florida.

The immaculate Umhlali Country Club course stood up well to the test posed by these top players. Only Chen broke par on her way to winning not only the Championship but also the Best Nett and the KZN Junior Championship. 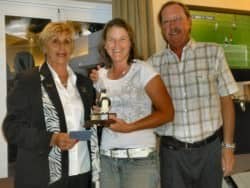