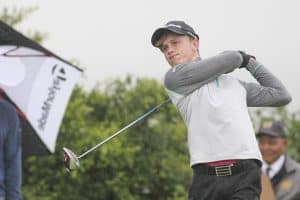 Jayden Schaper opened up a five-shot lead with a second round 63 in the South African Stroke Play Championship at De Zalze Golf Club; credit Withers and Son Photography / GolfRSA.

The Ebotse golfer got off to an eagle-birdie start and racked up five birdies over the last six holes to establish a five-shot lead over his closest pursuers on Wednesday.

The 17-year-old Benoni golfer will have to hold off a world-class chasing pack, though, if he hopes to get his hands on prestigious trophy on Friday afternoon.

These are just some of the big names that are within striking distance at the 36-hole mark.

“Now it not the time to get ahead of myself,” said Schaper said. “I played the last two days with a strategy for the course. I shot rounds of 67 and 63 and I’m not going to change a thing for the next two rounds. A five-shot, six-shot lead can evaporate quickly, especially at a course like this where you have to hit fairways and greens to go low.”

Schaper hit a sand-wedge from 105 yards and slam-dunked it for eagle at the first.

“I birdied the second and had a run of straight pars with a couple of lip-outs until I made a routine birdie at the par five (eight). I left my birdie putt in the throat at nine, but I holed a five-footer for birdie at 11 to go five-under for the day.”

Then came the birdie blitz.

“I knew about Garrick’s course record and I wanted to go for 62, so I went for the green at 18. The ball pitched 10 foot below the flag on the right. I had the line, but the eagle putt died inches from the hole on the low side. I tapped in for birdie to tie Garrick’s new record. I’m really pleased that I achieved what I set out to do, which was to put myself in contention before the last two rounds.”

Schaper was one of 33 players in the 148- players’ field that managed to finish in red figures on a wet and very windy first day, but par took a beating with sunny skies and warm weather on day two.

Making the most of his local course knowledge, local favourite Higgo fired a string of seven birdies from the 13th on his way to a record setting nine-under 63 and he moved to nine-under.

Purcell from Portmanock started his round on the back nine. He erased a birdie start with a bogey at 11, but made five birdies on the bounce from the par five 14th to go six-under. Further gains at two, seven and eight earned Purcell a share of second with Higgo.

Nienaber posted 64 to finish at seven-under and the big-hitting Bloemfontein golfer was later joined Walker from Kilmarnock Barassie (71) and Van Wyk from Fancourt, who was flawless around the championship layout.

Meanwhile former South of Ireland champion Sugrue had some scrambling to do for his second round 68. The Mallow golfer will go into moving day tied for fourth on eight-under with Filippi.

The Ernie Els and Fancourt Foundation player shared the overnight lead with Walker and fellow Scotsman Kieran Cantley after a flawless 66. He was just as impressive on day two and, aside from a double bogey at 10, handed in a spotless card with red numbers at two, seven, eight and 15.