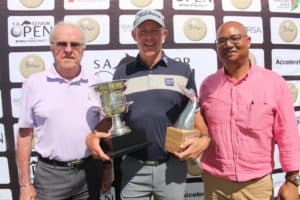 The 2007 SA Open winner celebrated his 19th victory and maiden senior win on seven-under-par 281, sealing a nine-shot victory with a round of one-under-par 71.

The 53-year-old Potchefstroom golfer headed into the final day with a commanding eight shot cushion and never came under pressure from the chasing pack, led by two-time former champion Mark McNulty.

He made amends for a lone bogey on the par four fifth with his first birdie at the par five seventh and ended a run of straight pars with a second gain on the closing hole. 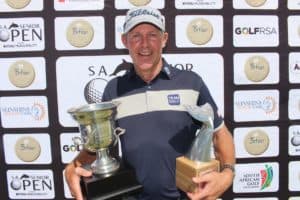 “Winning the double is very special,” said a smiling Kingston. “I realised about halfway down the back nine that I was going to win this and that’s the first time I started to relax and enjoy it. It’s not as easy as it sounds to start with a big lead. Mentally, I just put it out of my mind. I started the day level with the other guys so I could stay in the moment and play my normal game.”

Reigning Sunshine Senior Tour Order of Merit leader Kevin Stone made an early move with birdies on the first and third holes, which helped Kingston to keep his mind focussed.

“Kevin got out of the blocks quickly and he had a birdie putt on the fourth to go three-under and I felt like I wasn’t going anywhere; I was just making pars,” said Kingston. “When I dropped on the fifth and he hit it close again, I realised what Mr Player meant when he messaged me and said there is no such thing as a lead. A seven or eight shot lead could quickly turn into three of four.

“I carried on putting the ball in the fairway and on the green and making free pars and that helped me to stay clear and focussed. I hit a couple of really good shots, while Mark and Kevin made a few mistakes on the back, which surprised me. That actually gave me the freedom to enjoy the last couple of holes.

“Dale Hayes has a saying: “you always want to be so far ahead coming up the last that you can choke in peace.” For once in my life, I actually experienced that. It was really nice.”

Kingston may have stamped his authority on the tournament with earlier rounds of 72, 66 and 72, but his most enjoyable moment undoubtedly came on the 18th green when he boxed a three-footer for birdie in front of the appreciative crowd.

“I really wanted to shoot under par today,” he said. “I know it didn’t matter, but making birdie on the last was pretty important to me and it felt good to put that four on my card.

“It’s been such an incredible week. This place has a very special place in my heart, because we came down here on holiday for so many years. To be presented with a course in such pristine condition and to go home with the trophy is really amazing.”

A final round 69 boosted two-time Staysure champion Chris Williams to second on two-over, while  McNulty, Bobby Lincoln and Neil Cheetham from England tied for third on four-over after carding respective rounds of 74, 72 and 72.