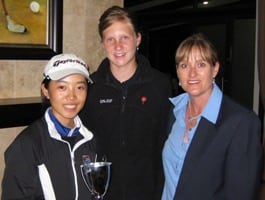 Gauteng North Vice-President Jenny Brewis reports: Well, as you have heard by now, our very own Connie Chen snatched the tournament from Yushira Budram on the third sudden death play off hole at Irene Country Club after the both finished on 148, four over par for the day.

The A division fielded 27 players after Kirsten Kloppers withdrew due to a ligament injury a few days before. Yushira, who was drawn in the four ball ahead of Connie and her fellow players, Bertine Strauss, Nobuhle Dlamini of Swaziland and Tijana Kraljevic. She teed off with Bianca Barnard, Larissa Ras and Talia Nel on a very wet and heavy golf course that truely tested not only ability, but also course management skill.

Yushira finished her first round on 77( + 5), tying for second place with Bertine, Tijana, Judy Papenfus and Talia Nel. Connie played a good first round of 74 and went off the first again as the leader on the scoreboard.

By then it was virtually certain that the winner of the tournament would emerge from these five girls. But the typical Gauteng weather made sure that the afternoon’s play would not finish without some interruption. Yushira had just finished playing her 27th and Connie her 26th hole when the lightning siren halted play for half an hour. Connie had some bad luck on the 26th hole when her ball moved in the bunker on address. She finished the hole on a seven and dropped three shots in one hole. Yushira was playing excellent golf and had by then narrowed the gap to one stroke.

Well those birdies flew in for Connie as she made three birdies over the last four holes to catch up with Yushira and force a sudden death play off for the tournament over holes 1, 2 and 18 at Irene Country Club. Not even the drizzle that started again prevented fellow players, parents, caddies and supporters following the two girls to the first tee.

The deciding shot was Connie’s second on the eighteenth hole. Both she and Yushira had tee shots to the middle of the fairway leaving both with a short iron in. Connie nearly eagled as her second landed 30 cm from the flag. Yushira was left and some 5 metres short of the pin. Yushira tried her best for the birdie but it was unfortunately Connie’s day. In true sportsmanship the girls hugged and parents congratulated each other on their daughter’s performance.

The B Division had a small field of seven players after two withdrawals. 13 year old Michelle Wears-Tayler of Woodhill Country Club made 75 stableford points to win, followed by Nicolene Jansen of Zwartkops on 71.