Connie Chen and Bertine Strauss have good rounds at Annnika but Victoria Tanco fires a 66 to lead the field with day one leader, Laetitia Beck

Israel’s Laetitia Beck and Florida’s Victoria Tanco share the second round lead of the Annika Invitational after their impressive play on Sunday, day two of the event. Beck, who led after the first round, shot one-under-par, while Tanco fired a six-under 66 to jump from tied fourth to share the lead at the Reunion Resort.

Manager Erica Lefson said she able to walk the 18 holes watching both South African players who were drawn together. “What great golf to watch. At the start of the game we had coaches from six universities watching the two girls. It was so funny to get a coach come up and chat to me and find out about the players, etc. and as she left the next one would introduce him/herself – as Bertine said we had rent a crowd.”

“I had a very shaky start today,” said Bertine. “I was four over after six with drops on two, three, five and six. I just told myself to hang in there and I found my rhythm after nine holes. I hit the ball really well on the back nine and gave myself some good opportunities for birdies.

“I managed to make birdies on 11 and 18. I am happy that I was able to hang in there today and I am looking forward to finishing strongly tomorrow. We are having a great time so far and we have learned a lot from all the activities that they have for us.” 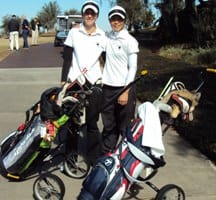 Connie reported that she had had a good start today picking up a birdie on two, hitting her approach shot to tap in. “Got a bad break on the fifth when my ball landed in someone’s divot on the fairway and ended up with a bogie. I then dropped on the par three seventh but came back with a good birdie on eight.

“I then turned level par again but three-putted the 10th hole. On the 11th I once again ended up in someone’s divot in the fairway but made a good up and down for par. I then nearly had a hole-in-one on the 12th with a five iron which set me up for my third birdie of the day. After that I had all pars coming back ending my day level par and four over for the tournament. I had a lot of fun today playing with Bertine and looking forward to a fun filled tomorrow.”

Erica’s comments “Bertine was not hitting the ball off the tee well for the first four holes and had some lucky breaks. It was great to see that she then took control of the situation and I must say I have never seen better striking of the ball by Bertine on the second nine. She had nine birdie opportunities but could only get the ball to drop twice – a great two-under second nine.

“Connie has grown in leaps and bounds – her game is so much stronger and she hits the ball so straight and directly at the pin. Her golf for two days has been solid striking of the ball and good finishes.

“Yes – I can say it again – I was spoilt and found it a privilege to watch the golf today.”