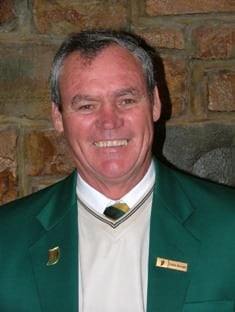 Colin Burger was elected the new president of the South African Golf Association (SAGA) at the Association’s Annual General Meeting held in Pretoria on Wednesday night. Burger will take over from the current incumbent, Enver Hassen, as from Saturday 25 September 2010.

“It is an honour for me to have been elected to this position,” said Burger, speaking from Pretoria Country Club where the 50th South African Inter Provincial tournament is taking place. In terms of the SAGA’s constitution, he will serve a two year term.

“Colin has been on the SAGA Executive Committee for five years, the last two of which he served as Senior Vice President,” said the outgoing SAGA President, Enver Hassen. “He is an experienced and competent administrator and I wish him well for the term of his presidency.”

In addition to having been involved in the administration of the sport at national level, Burger has served time at both provincial and club levels as well. “I have played the game for many years and in this time I have served the clubs I have joined, at various levels, including having been captain, in 1999, at Kloof Country Club, in Durban. I have served on the Kwazulu Natal Golf Union Executive for eleven years, the last four of which I have been president.”

Burger pointed out that as SAGA President he cannot serve, in the same position, his provincial union and will consequently step down as Kwazulu Natal Golf Union President at the Union’s Annual General Meeting taking place in October.

In terms of challenges that lie ahead, Burger is determined to focus on handicapping, growing the game and improving communication with stakeholders in the sport.

“Golf is, like a lot of business in these tough economic times, going through a rough patch. I would like to work with clubs, through their provincial unions, in trying to grow the number of participants, particularly amongst the school going population. Golf development will be a major focus.”

“South Africa is proud of the fact that such a small and enthusiastic golf population has produced so many stars on the professional circuits of the world. During my term I would like to sustain and even improve the way we are carrying out our talent development projects. Providing more playing opportunities to these talented players in helping them achieve their objectives is an important part of developing them to their full potential.”

Colin Burger lives in Durban and is married to Tibby. They have two children Murray (29) and Melissa (34).