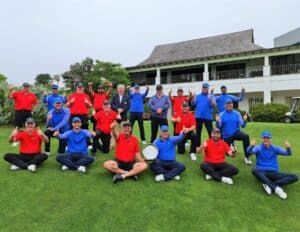 6 December 2021 – The Inland Team evoked memories of the 1999 “Battle of Brookline” and the 2012’s “Miracle at Medinah” with a dramatic comeback on Singles Sunday, but the resolute Coastal Team prevailed for a narrow 13 – 11 victory to lift the inaugural Coastal Inland Challenge title at the magnificent St Francis Links.

The two teams – comprising the top four available Senior and Mid-Amateur golfers from each region – went head-to-head in the Ryder Cup-style format over three days at the Jack Nicklaus signature championship course.

“Heading into the Singles with a 12 – 4 lead, we were in a very favourable position, needing just a half point to win,” said Coastal Captain Mike de Swardt.

“The Inland team showed a lot of fire in the last Fourball session, though, and we expected them to come out guns blazing. They came very close to a clean sweep. What impressed me was that even after Gerlou [Roux] guaranteed us the win in the first match out, the guys kept playing as if there was no result yet. It really endorsed the value they placed on being selected for this amazing tournament. I am incredibly proud of my players and the determination and commitment they brought to this event.

“Well done to the Inland Team for showing up on the last day in the manner they did. It made for a very memorable first Coastal Inland Challenge and I am certain guys are going to start vying for places in next tournament as soon as the 2022 season kicks off.” 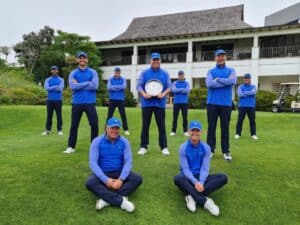 The Coastal Team certainly lived up to their billing over the first three rounds, dominating the opening Foursomes and Fourballs.

With a match in each session ending in a tie, the Coastals held a 7 – 1 advantage and it looked as if the Inland eight were in for another hiding on the second day as the wind specialists sailed to a 3 – 1 win in the Foursomes.

But the Inlands began to turn the tide in the afternoon.

South Africa’s No 1 Mid-Amateur Jacques van Tonder and former SA Mid-Amateur champion Graeme Watson won the 17th with a par to go 1-down, before mid-amateur Shaun Le Roux put paid to their hopes with a superb approach on the final hole. The Coastal Team was truly in the pound seats after Van Tonder’s par-putt skimmed by the hole.

With a leaderboard painted Coastal blue heading into the singles, Inland captain Thinus Labuschagne told his men in red to take no prisoners.

Roux and Scullard were sent in first. The fiercely contested match saw the two-time SA Mid-Amateur champions trade blows for 15 holes. Roux finally managed to break the deadlock with a magnificent up-and-down for par at the par-five 16th to go 1-up. When Scullard’s key par-putt on the par-three 17th stayed out, Roux clinched it for the Coastal Team. 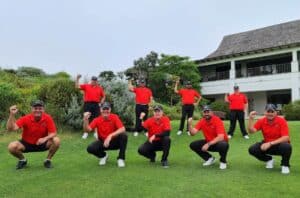 “From that point my boys played purely for pride, but boy, did they bring it!” said Labuschagne.

“Clive led the assault when he pitched a perfect 5-iron on the 17th for an ace to win 1-up. Word filtered through the field, and then the rest of the guys swept to victory, one after the other. They were so fierce and so determined. I haven’t been that proud since the birth of my first child.”

Scoring was low and the contests were tight, but at the end of the day, golf was the big winner, said South African Golf Association Acting Vice President Deon Nel.

“It was every bit as exciting as we anticipated. The shot-making and rivalries on the course were electrifying, and the camaraderie off the course was exceptional.

“Not only do we congratulate Mike and the Coastal Team on their victory, but we congratulate every player who qualified and made the trip. Our heartfelt thanks to Jeff Clause, his team and the members of St Francis Links for making the course available to us for our inaugural tournament. This exceptional course proved a fantastic match play venue and the perfect backdrop to this event.” 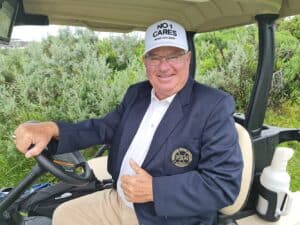 Host and CEO of St Francis Links, Jeff Clause, had one departing message for the players.

“I love this game of golf. I love presenting this great golf course to great golfers. Some of my members were grumpy when Dean Burmester shot 17-under to win the PGA Championship. I will be taking the statistics from this week and link it to my newsletter, because the golf that was played here was phenomenal. Phenomenal.

To view the individual rounds and matches, click HERE: