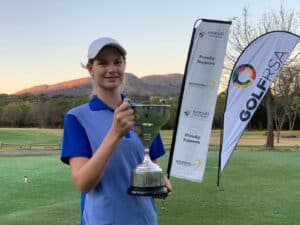 18 September 2021 – Bobbi Brown’s breakout season continued as she held her nerve to clinch her first national title this September.

The 17-year-old Steenberg golfer celebrated her first provincial success in the Western Province Women’s Amateur Stroke Play Championship in April. A few weeks later, she underlined her growing stature with a third-place finish in the Nomads SA Girls Rose Bowl Championship. In May, Brown helped Western Province to their first victory in 18 years in the prestigious WGSA 72-Hole Teams Championship at Kingswood Estate.

This past weekend she capped things off with a commanding eight-stroke victory in the Nomads SA Girls Stroke Play Championship at Magalies Park Country Club.

The latest win is by far the biggest of Brown’s career and a clear signal that she is on her way to becoming one of the country’s top players. Victory boosted Brown into 8th on the WGSA Junior Ranking, while a runner-up finish in the Individual Competition at the team event in George lifted her to 11th in the Open Amateur rankings.

On current trajectory, she could soon be pushing for the top spots. 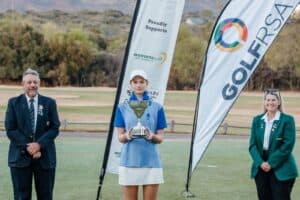 “I’m so happy with this result,” she said. “I got off to such a good start on the first day, but I could feel the nerves throughout my second round. I kept reminding myself just to focus on each hole and not to get ahead of myself.

“This win is massive for me. Nomads do so much for amateur golf and to win their flagship championship is something all juniors aspire to do. I am really proud this achievement.”

Brown got off to a fast start and back-to-back birdies at the closing holes for a three-under-par 69 handed her a four-shot lead. Playing 27 holes on the first day of the 54-hole event, she racked up four birdies and finished the day with an 11-shot advantage on the field.

“I was really solid over the first 18 holes, and I made a lot of good up and downs. Then in the afternoon, I had my best-ever nine-hole score of four under,” she said.

On the final day, Brown finished up her second round with a one-under 71 and she closed out the victory on two-under-par 214 with a final round 75.

“I tried not to think about the score, but I couldn’t help myself,” she said. “I was a bit nervous, and I held back on my driver. Actually, everything felt a bit off, but I managed to get it done and I couldn’t be happier.”

In a repeat of the 2019 event, Ekurhuleni’s Kiera Floyd wrapped up the Under-16 title with a second successive runner-up finish on six-over. Free State’s Gabbi Venter finished third, a further stroke back.

In the Silver Division, glory belonged to the local favourite Megan Marais. 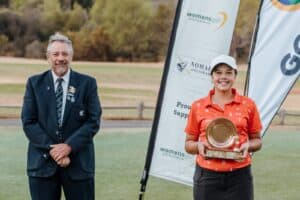 One of the seven 11-year-olds in this year’s event, the Magalies Park junior fired rounds of 89, 83 and 85 to comfortable secure the win on her home course.

Womens Golf South Africa president Sarah Braude was delighted to have the tournament back on the calendar after the cancellation of last year’s event due to COVID-19.

“The 46th Nomads SA Girls Championship lived up to expectations and we are proud to have brought our flagship junior championship to Magalies Park for the first time,” she said.

“We were very pleased to welcome 37 new junior girls competing in their first Nomads SA Girls Championship and a further 12 girls who had progressed to the Championship and B Divisions since 2019. This bodes well for junior girls golf, especially with 26 girls aged 14 and under in the field.

“Bobbi has had a great year and we welcome her to the GolfRSA winners’ circle. Leading from start to finish is not an easy feat, but Bobbi showed her resilience in taking on the test of a lengthened Magalies Park course with fast, undulating greens.

“There were so many highlights from this year’s event and we would like to thank Nomads for their continued support and partnership in ensuring that, together with the Nomads SA Girls Rose Bowl Championship, we were able to stage these two championships this year and showcase the depth of girls golf talent in South Africa,” added Braude.

“This championship would not have been possible without the incredible effort from the entire Magalies Park Resort team and we extend our appreciation to Muis Lombard and his amazing team, together with host Union North West. Our appreciation also goes out to all Unions and their chaperones who looked after the girls and ensured that they not only leave with great memories but also life skills both on and off the golf course.”