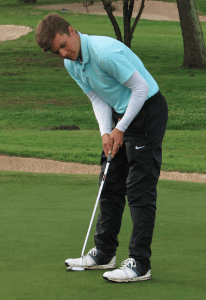 Francois Cillers took scant notice of the cold and wet weather as he blitzed Royal Cape’s back nine en route to a round of 69 and a two-shot victory in the season-opening Bridge Fund Managers Junior Series on Friday. Three birdies and a chip-in eagle on the par-five 16th saw the Western Province Junior Matchplay edge two-time Bridge Fund winner Tyran Snyders and home favourite Idrees Saban by two shots.

A bogey on the last hole affected only the margin of his victory as the Paarl Boys High student earned his place in the National final on the same course that fellow Strand Golf Club member Deon Germishuys kicked off his tremendous 2017 season. Germishuys went on to win the Bridge Fund Managers Junior Series Final, the SA Amateur Championship and two Nomads events before finishing fourth in the Junior North and South Championship at Pinehurst early this month.

Although he is a natural at most sports, Cilliers has chosen to concentrate on golf. “It is very tough mental game and I love the challenge of having to concentrate for five hours per round.”

Like many young golfers, his dream is to play on the PGA Tour, but with a key difference. “My older brother Jacques, who plays off scratch, is studying mechanical engineering at university. He is interested in designing golf clubs and my dream is to play professionally with his clubs, and with him as my caddy.”

Paul Stewart, Executive Director at Bridge Fund Managers, said the first year of the Bridge Junior Series had exceeded expectations, attracting full fields and producing outstanding golf. “So, we are looking forward to what the country’s exceptional young boy and girl golfers have in store for us in season two, and Francois, Tyran and Idrees have gotten us off to a thrilling start.”

U13 A Division: Gross

U13 A Division: Nett