Free State claimed the promotion battle in the 2018 SA Mid-Amateur IPT with an 8 – 4 in round 4 at Kimberley Golf Club; credit GolfRSA.

KIMBERLEY, 11 October 2018 – Central Gauteng defended their South African Mid-Amateur Tournament title without hitting a single shot on Thursday, while Free State produced another winning performance in the fourth round to claim promotion at Kimberley Golf Club.

Northern Cape mowed down Border 9.5 – 2.5 and defeated Mpumalanga 7 – 5 to push their tally to 8 points, but it was too little, too late. The host union had to settle for second in the B-Section standings after Free State routed Limpopo 8 – 4.

The Free State crew raced to a 3 -1 lead in the foursomes.

Heindrich Erasmus, skipper Josef Fourie, Pieter Swartz, Lourens Erasmus and Jacques Schutte rallied for 5 points in the singles that delivered an 8 – 4 result and sealed their promotion.

With one round remaining, the B-Section champions are not quite done yet.

“This is the first time we won the B-Section, so it’s a huge deal for us, but we are not going to pop the cork on the champagne just yet,” said manager Corne Viljoen.

“We had a team meeting after our win against Limpopo and the consensus was that we’ll celebrate on Friday night. We have one match left against Mpumalanga and we want to win it.

“If you’re going to the A-Section, you’ve got to do it in style. Last year we narrowly beat Mpumalanga by 1 point, and they will be gunning for us, but we are determined to finish the week unbeaten.” 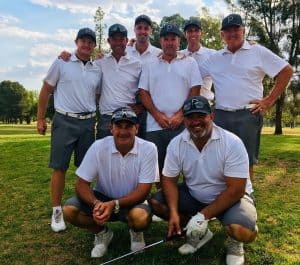 Central Gauteng could put their feet up and enjoy their fourth round bye as the opposition jostled for position.

“We did the hard graft in the first three rounds with five straight wins, so it was great to take the day off and visit some of the sites here in Kimberley,” said team manager Jaco du Plessis. “We are over the moon with the result, but we’re not done yet.”

Central Gauteng’s premier IPT team successfully defended their SA Inter-Provincial Tournament in four rounds at Oubaai last month, but the side battled to summon the energy to beat Southern Cape in the final round.

Du Plessis believes the mid-amateur team will go the distance against Western Province.

“We have defended the title, but we still have one match to play and it’s a bit of a grudge match,” he said. “We needed 1.5 game points on the last day to win last year. We got it done, but we lost the final match to Western Province. This year we want to beat Province and go out with a bang.”

Meanwhile Ekurhuleni beat North West 9 – 3 to move to second in the A-Section standings and Gauteng North rose to third, courtesy of two winning performances. The Daisies defeated Southern Cape 7 – 5 and edged out KwaZulu-Natal 6.5. They face Ekurhuleni in the final round.

KwaZulu-Natal did, however, beat Southern Cape 7 – 5 to leave North West dangling at the bottom of the log. The two teams will go head-to-head in the final round and North West will have to win by at least 10 – 2 to avoid relegation.

In the B-Section, Boland will play Eastern Province and Border goes up against Limpopo.