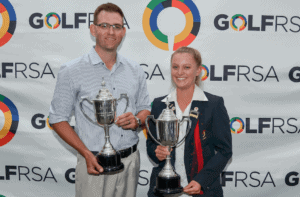 The hunt for the country’s top club champions has begun as GolfRSA announced that its popular Club Champion of Champions event is back following the forced cancellation of last year’s event due to the Covid-19 pandemic.

The event, which pits the country’s club champions – from multiple divisions – against one another has been running since 2017 and all starts at your home club’s club championships. Winners are then invited to a Regional Final, from where the top players will qualify to play in the National Final.

“I am delighted that we are in a position to launch the 2021 Tournament,” said GolfRSA CEO Grant Hepburn. “However, we all know only too well that we are still constrained by the Covid-19 pandemic. To ensure ongoing compliance with Risk Mitigation Guidelines, various contingencies are being considered for the latter stages of the GolfRSA Champion of Champions in case it is not possible to follow the format of previous years for the National Final.”

The last time the event was played, in 2019, it was Gauteng amateurs Ryan Dreyer and Kera Healey who walked away with the honours in the A Division, while the B-Division was won by Free State’s Christo Hattingh and Gauteng’s Suzan Jacobs. KwaZulu-Natal’s Monty Botha and Northern Cape’s Joanie Herselman claimed the bragging rights in the C-Division.

Watch this space or contact your home club for more information about the GolfRSA Club Champion of Champions.

Past winners of the GolfRSA Club Champion of Champions