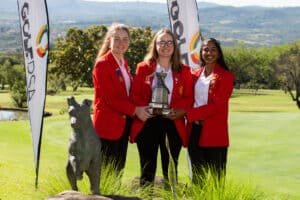 31 May 2022 – Sam Whateley, Kaiyuree Moodley and Central Gauteng captain Marine Legentil ended a six-year drought for the Lions in the 2022 GolfRSA 72-Hole Teams Championship at Mbombela Golf Club in May.

The Central Gauteng trio was simply superior as they marched to a 19-stroke victory in the Swiss Team Trophy, combining with rounds of 147, 142, 143 and 141 to triumph on a winning total of 573.

Whateley spearheaded the challenge, firing 72, 67, 71 and 68 to record the lowest scores in each round, and her efforts were excellently backed up by fellow GolfRSA National Squad member Moodley, whose rounds of 75, 75, 72 and 73 secured the wire-to-wire success for the Lions.

Legentil, the reigning SA Women’s Amateur champion, could not have imagined a more perfect swansong for the team before she and Whateley head to the United States to join Moodley on the US collegiate circuit.

“I am absolutely over the moon,” said the delighted 18-year-old, who will be enrolling at Columbus University. “Since our last win in Middelburg in 2016, we’ve been knocking and knocking. To finally pull it through for the Lions is an amazing feeling.

“It was a huge goal for us, because Sam and I will be leaving for the USA soon. We really wanted to get this win for the Lions, and we felt we had a great chance to win with Kai on the team. She has been at college in the US for two years now, and she brought a lot of experience to the team this year. 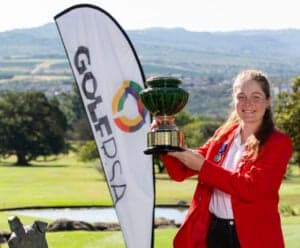 “You have to play as a unit and trust your team-mates in a team competition like this where two scores count in every round. Sam and Kai really dug deep this week to get us to the finish line. I am really proud of our achievement and knowing that we gave our very best for Central Gauteng.

“It was an unforgettable week and on behalf of all the teams, I want to applaud the green staff at Mbombela Golf Club for all their efforts to present us with such a pristine course. To the clubhouse staff also, a big thank you for your hospitality and top-class service.”

Whateley’s exceptional performance for a 278 total at the Mpumalanga course earned the Country Club Johannesburg golfer the medallist honour in the Individual Competition.

Moodley rounded out the top five in tied fourth a further three strokes back alongside with Gabbi Venter. The current GolfRSA No 1  and the captain of victorious Free State, who lifted the Challenge Trophy title, posted rounds of 71 78 74 72. 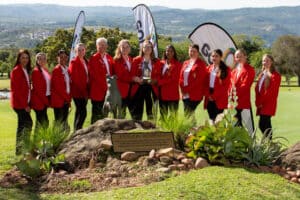 Central Gauteng almost celebrated a one-two finish, but the B-team was edged out for second by defending champions Western Province A whose 592-total earned the side the runner-up spot.

“We are delighted to have the trophy return to Central Gauteng, not only because we have been knocking on the door for the past 6 years, but also because this is the inaugural provincial event under the banner of the amalgamated Central Gauteng Golf Union,” said CGGU Co-President Sheryl Matthews.

“Besides our B-side almost edging out Western Province A to take second place in the Swiss Trophy, our C-team showed their tenacity, coming from 6th position after round one to finish runner-up in the Challenge Trophy.

“It is very exciting and encouraging for us to see the current depth of talent we have in Central Gauteng despite losing players annually to US colleges and professional golf.”