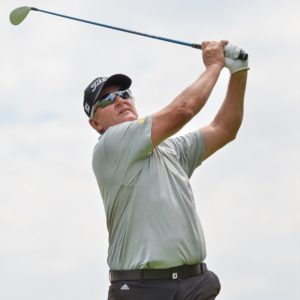 Central Gauteng skipper Steve Williams led his side to a 10.5 – 1.5 victory over KwaZulu-Natal on day two of the SA Mid-Amateur Inter-Provincial at Oubaai Golf Club; credit Ernest Blignault.

10 October 2017 – Central Gauteng and Eastern Province took no prisoners and Ekurhuleni staged a huge comeback on day two of the South African Mid-Amateur Inter-Provincial in the Southern Cape.

It’s only day two of competition, but the calculators are hard at work already.

Central Gauteng and Western Province topped the log after two victories apiece in the first round and both teams joined the action at Oubaai Golf Club on Tuesday.

After a clean sweep in the foursomes, Shaun Stapleton beat Graham Dickinson 5 & 4, Dylan Keylock downed Keith Forde 4 & 3 and Ruan Botha knocked out Dale Burraston 3 & 2 to push Central Gauteng’s tally to seven points. Ryan Dreyer and Cliffie Howes – playing at one and two – both won 2 & 1 and skipper Steve Williams eliminated Murray Gilson 2-up for their 10th point.

David Brown scored a lonesome point for KwaZulu-Natal when he birdied the last hole to beat Kevin Sharp 1-up. Bradley Davidson squared his game against Wendell Bossenger at 16, but the Central Gauteng player halved the game with a par at 17 and birdie at 18.

The defending champions retained the top spot in the log with six points and 28 games points, but they lead by the narrowest of margins – half a games point – from Central Gauteng. With just two matches left on their card, the Cape side will need to pull out all the stops against Gauteng North on Wednesday and Central Gauteng on Friday.

Ekurhuleni is also still in the mix with six points and 26 games points, but their loss to Central Gauteng in the first round might hurt the 2014 champions. Like Western Province, the team only has two matches left.

Central Gauteng still have three matches to go and positive results against Boland and North West in Wednesday’s third round could prove pivotal in the final outcome.

Eastern Province continued their winning march with two more convincing victories on Tuesday. After scoring four points in the first round, the side strengthened their bid for promotion when they routed Border 9 – 3 and handed Limpopo an 8.5 – 3.5 drubbing.

Double success moved Eastern Province to the top of the log with eight points and with 33 game points in hand, the Bay Boys are in a strong position to regain top tier status.

Mpumalanga knocked out Northern Cape 7 – 5 to up their tally to four points, but their first round loss to Southern Cape could come back to haunt them.

The host union had a second round bye with Free State after a double win in the first round and will join the action on Wednesday against Eastern Province. And, with a double bill against Northern Cape and Border on Thursday, the Garden Route side will aim to level the playing field.

In Tuesday’s final match, Limpopo and Border drew 6-all.