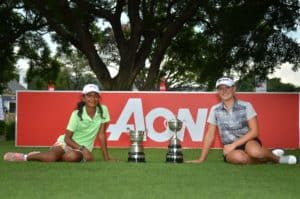 18 February 2020 – Caitlyn Macnab set any aside any thoughts of celebration despite claiming the biggest title in her golfing career, the Aon South African Stroke Play Championship, on her 18th birthday.

The Serengeti golfer signed for a final round of 68 on Royal Johannesburg & Kensington Golf Club’s West Course to finish on seven-under-par, winning by two strokes over Silver Lakes’ Larissa du Preez.

The Abe Bailey Trophy was claimed by 13-year-old Kamaya Moodliar from Umhlali Country Club in KwaZulu-Natal., who won the B-Division title. The pint-sized Moodliar never relented her three-shot overnight lead and stretched to four shots with a closing 84 to triumph on 249.

Heather Kruger from Country Club Johannesburg was second and Sabiha Bacaus from Umkomaas a further three shots adrift in third.

While Macnab may have ushered in adulthood in style, the GolfRSA No 1-ranked amateur will put the celebrations on ice as she immediately turned her attention to the Aon South African Women’s Amateur Championship that tees off on Wednesday.

“I’m absolutely delighted to get the win,” said Macnab, who is seeking to emulate 2019 champion Kajal Mistry in winning the covered SA Amateur double.

“Turning 18 is quite a big deal and to be able to get the win on my birthday is something really special that I won’t forget for the rest of my life. In a weird way it feels a little bittersweet.

“As golfers we are so quick to get down on ourselves after a bad shot or a bad round, so when you win it’s important to celebrate and try to stay on that high. But tomorrow is a new day and a new tournament and I need to stay focused and keep my eye on the prize.”

For most of the final round, the tournament was a three-horse race between Macnab, Du Preez and overnight leader Williams.

The Western Province golfer started well and led by a stroke through 12 holes, but faltered with three straight bogeys from the 13th.

Du Preez and Macnab reached the par-three 16th level at five-under when Macnab hit her tee shot long and left. What followed was an outrageously good up and down that set her on her way to victory.

“Today was a really great game between Kaylah, Larissa and myself,” she said. “I had to fight really hard. I made some mistakes, but the turning point for me was when I made par on 16. It felt like an impossible shot after I short-sided myself against the embankment. The pin was tucked close to the edge, and I only had about 10 feet to play with, but I managed to chip it to within a foot. Then I made a good birdie on 17 and on 18 I had a tap-in birdie after just missing my eagle putt.”

For the first time in the tournament’s long history, the men’s and women’s Aon SA Amateur Championships are being competed for simultaneously, on the same course. Most of the men who had already completed their first round of match play on the East Course, walked across to the West’s closing hole to cheer Macnab to victory.

“The whole thing has been amazing,” exclaimed Macnab.

“Everything feels more professionally run and it proves just how much the game is growing, especially among women. Having Aon here as the main sponsor has been huge and it is really exciting for the future of golf in South Africa.”

Like Macnab, Moodliar will leave the celebrations until later. First, she has a round one date with Heidi van der Berg from Zwartkop Country Club in the first round of the Flight Division.

Both the Championship and Flight division matches on day one will be played on the West Course, where after action will move to the East Course for the duration of the match play stage.