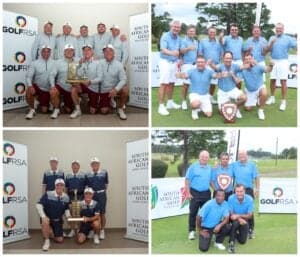 12 April 2022 – The 2022 SA Senior Inter-Provincial had all the ingredients of a Hollywood blockbuster – weather issues, matches going down to the wire, victory and promotion battles perched on a knife’s edge – but in the end, Central Gauteng, Free State, Southern Cape and Ekurhuleni were crowned the victors.

The first curveball was the weather, which impacted play before the tournament even got underway.

The A-Section IPT kicked off with the Senior and Super Seniors forced to walk during the official practice round as rain swept across the perfectly prepared championship layout at Heron Banks Golf Course in the Free State.

Meanwhile, in Mpumalanga, where the B-Section was being played, the competitors couldn’t even appreciate the magnificence of the Middelburg Country Club as their practice round was cancelled when the rain flooded the course and inclement weather forced everyone indoors.

But what a difference a day makes, as both Sections teed off in bright sunshine at their respective courses on Tuesday, 5 April.

The Free State Seniors asserted themselves in the B-Section in Middelburg, while at Heron Banks, the Western Province Seniors got their A-Section title defence off the mark with a double victory. 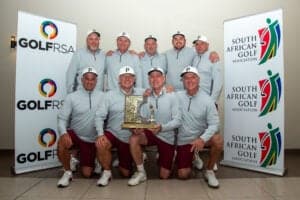 However, Central Gauteng also went two-for-two in their opening matches, which set the stage for the drama that unfolded on the final day.

Both teams stayed the course, reeling in points and, heading into the final round, they were tied on 10 points each. Central Gauteng had a small advantage though, having edged Western Province for the No 1 spot in the log on day three with 46 games points to 43.5.

“With a massive thunderstorm forecast to hit Heron Banks shortly after lunch time on the final day, we changed the format and played the Singles first to give every team opportunity to score the maximum points,” explained GolfRSA Tournament Director David Younge.

“The storm arrived as predicted just as the first foursomes got underway, and very quickly lightning forced us to suspend play. After some two hours of non-stop rain and lightning, it became clear that play would not resume, and we had to call a result.

When the calculations were done, it was Central Gauteng who emerged victorious with a 6.5 – 5.5 result against Southern Cape and a 7 – 5 win over Western Province.

“This is our fifth win in seven years, and the team is absolutely delighted,” said winning captain Schalk Naude. “It’s unfortunately the way the chips fell this week with the weather, but we are nonetheless stoked with the result. We are a bunch of guys who really play for each other, and that showed throughout the week. The guys sacrificed a lot to prepare for this week, and we never gave up. We fought for every point and games point and it’s fantastic that we get to celebrate all that effort with the win. A big thank you to my teammates, for their dedication and determination, and to our manager Mike Faasen, who did a great job keeping us motivated this week.

“On behalf of all the teams here this week, we want to thank the Heron Banks management and greens staff for going above and beyond in trying circumstances at times. The course was in fantastic condition, despite all the rain, the catering fantastic and the staff a cut above. Thank you for an incredibly memorable week.” 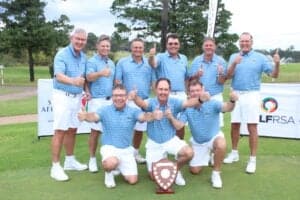 In Mpumalanga, Free State kept their foot on the pedal from start to finish.

Having beaten the host union 8.5 – 3.5 in their opener, the side routed Northern Cape 9.5 – 2.5 and squared off against Border on the final day to seal their march to promotion with an unbeaten campaign.

“We came into the week determined to win and our resolution never wavered,” said skipper Hannes Spies. “We set out to get the promotion and every man on the team, and our manager Anton Coetzee, was committed to achieving our goal. Every man on the team put his hand up at some point and the team spirit in the camp was unbelievable.

“Credit must go to Middelburg Country Club’s greens staff. They had so much rain before we arrived and nearly 80mm on the practice day, but they worked tirelessly to present us with well-manicured course every day. A big thank you also to Gerrit Smit and the clubhouse staff, who went out of their way to make this week very special for all the teams.” 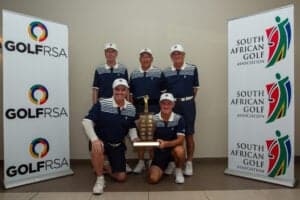 The A-Section battle threw up another surprise as Southern Cape came from behind to claim glory, while the B-Section promotion battle got as close as it could possibly get.

Southern Cape began the final round in the third place on the log behind defending champions and log-leaders Western Province, and second-placed Boland.

“We went out there with a mantra that it’s not over till it’s over and the guys brought everything they had to the final round,” said a beaming Maurice van Merch, managing the Garden Route side for the first time at Heron Banks.

“The boys pushed hard and won both our final matches, defeating Boland 4.5 – 1.5 and KwaZulu-Natal 4 – 2, to bring it home. It was a massive team effort from every player. They really showed character on the final day, and I couldn’t be prouder of the fighting spirit of this team.”

When action wrapped up for the B-Section Super Seniors at Middelburg Country Club, Ekurhuleni and North West were tied on 8 points and 20 game points each. 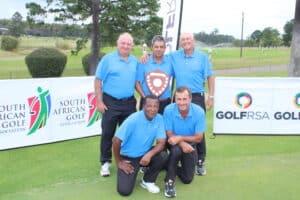 “Under the format of the tournament, it went to player count-out and you can just imagine the relief and celebration in the camp when we heard that we had pulled it through,” said Ekurhuleni captain Errol Civin.

“At the start of the day, I figured we were in a great position, but my team mate Rodney Smith warned that North West was still in with a shout. We decided to go all out and thanks goodness we had two solid victories, because who would have predicted how things would turn out?”

Ekurhuleni defeated Free State 4 – 2 and Northern Cape 5.5 – 0.5 to bank four points and vital game points, but North West matched the Roses with a 4 – 2 win over Eastern Province and a 6 – 0 clean sweep against Border.

“I am incredibly proud of the boys, and what we accomplished here,” Civin said. “I’ve been playing IPTs for 21 years, but at 71 you don’t know how many more chances you will get. They couldn’t have given me a better a birthday present than securing our promotion to the A-Section for 2023.”