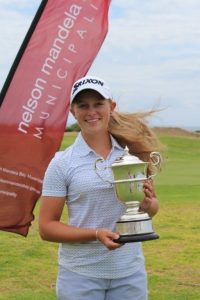 6 February 2019 – Two of South Africa’s most exciting young golfing prospects made an early statement in this year’s battle for supremacy on the women’s amateur circuit in the 2019 season’s curtain-raiser at Humewood Golf Club.

Showing extraordinary skill in the easterly wind that raged between 50 and 70 km an hour at the infamous Links on day one, Macnab navigated the five-club wind to set the first round target at three-over 75 in the morning.

The Benoni golfer led by two shots from Randpark’s Kajal Mistry and Tara Griebenow from Durbanville, while Rothman was seven shots adrift after an opening 82.

As conditions intensified, Macnab retained the lead with a battling 81, but Rothman from Durbanville closed the gap significantly in the afternoon session. The 2018 Sanlam SA Women’s Amateur winner fired two birdies down the stretch for a 75 to inch within a shot of Macnab’s 36-hole target at 156.

A double for Macnab at the last for a 73 and bogey from Rothman for a 72 saw the GolfRSA Elite Squad pair tie for the lead on 13-over at the end of regulation play.

“We’re best friends, so it was tough for us to go into a play-off, but that is par for the course in this sport, so we had to buckle down,” said 17-year-old Macnab.

The pair headed back to the first tee and nailed their tee shots down the fairway. 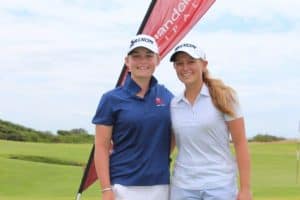 “We had the wind in our backs. I went first and absolutely bombed my drive. It went ridiculously far. Jordan also found the fairway, but I was at least 50 metres ahead of her. She had to go for it, but unfortunately she flew the green.

“I hit a little lob-wedge middle green. Jordan had to up-and-down to win and she hit a really great chip from a tough spot just short of the flag. It was me to putt first and I put it a foot from the hole. Her par putt lipped out and I had a tap-in for par to win.”

Victory lifted Macnab to first in the Junior Rankings and cemented her third spot in the Open Amateur standings. It was also a welcome vindication after a frustrating trip to the Annika Invitational USA.

“I had such high expectations for the trip to Florida last month. I loved the Slammer and Squire Course at the World Golf Village at first sight, but my swing deserted me in the first round.”

Fellow GolfRSA Elite Squad member Kaiyuree Moodley led the tournament through 36-holes and eventually lost in a play-off, while Macnab struggled, posting rounds of 77 and 81.

“I hit a lot of errant tee shots and I spent a lot of time at the range trying to figure out the problem,” she said. “Something clicked after the second round and I hit 14 fairways and 14 greens in the final round for a two-under 70 that saw me share the low round honours.

“I was really proud of the comeback and for having worked through the problem and that’s why this win is so significant for me. I brought a lot of positives back from the Annika Invitational USA and I was able to draw on that here at Humewood. It all helps me to be the best version of what I can be.

“Jordan won the Bridge Fund Managers Junior Series at Durbanville in a play-off, so I am sure she’ll forgive me this one. I would like to congratulate her on a great fight and for being so gracious in defeat.

“This was the first year that the Eastern Province and Border events were combined and we think it was a great idea. It was a great tournament with a strong field and it was great to see so many of the top ranked players support it.