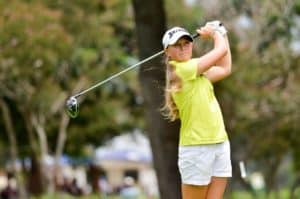 ORKNEY, 30 June 2019 – South Africa’s top ranked junior Caitlyn Macnab defied the lingering effects of swine flu to force a three-way tie for the lead in the opening round of the Nomads SA Girls Championship on Sunday.

Determined not to wear the bridesmaid tag again this year, the Serengeti golfer teed it up at Orkney Golf Club despite not having touched a club in nine days.

Macnab grabbed a share of pole position on one-over-par 73 with an eagle at the par five 17th and a textbook par at the closing hole, finishing alongside fellow Ekurhuleni junior Kyra van Kan and Symone Henriques from Gauteng.

“Kiera (Floyd) was under the weather when we arrived in Japan, and Kaiyuree (Moodley) and I both went down with the swine flu when we got home,” said Macnab, who helped the GolfRSA Junior Proteas to a sixth place finish in the Toyota Junior Golf World Cup.

“I was bed-bound for four days and I wasn’t sure if I’d play this week. Kai withdrew yesterday, but I decided to at least try, because I would love to win this one.

“I had absolutely no expectations when we teed it up this morning and it wasn’t a pretty round, but I’ll take a 73. I had two birdies and five bogeys, so the eagle came just at the right time.

“I didn’t hit the greatest drive and I had 132 metres left, but I pured my 9-iron. It finished two metres behind the pin and I sunk the putt. I found the course really tough to play this year. They haven’t had much rain and the green staff have done an amazing job to try and repair the frost damage. The fairways are very dry and the greens are quite bumpy. But it’s the same for everyone. Hopefully I get a bit more rust off in round two and post a sub-par round.”

Glendower’s Van Kan birdied the second and third holes and picked up another birdie at the par three 14th to set the early target, while in-form Henriques – coming off a runner-up finish in the Limpopo Ladies Amateur – was one-under through 14 holes, but a costly double bogey at the par four 15th cost the Glenvista junior the outright lead.

A birdie finish netted Floyd, also from Ekurhuleni, a share of fourth on two-over with Isabella van Rooyan from Western Province and former SA Women’s Amateur champion Jordan Rothman slotted into sixth place with a three-over 75.

Two-time defending champion Woo-Ju Son made her first competitive appearance after an eight month lay-off due to back surgery. The Country Club Johannesburg golfer birdied the opening hole and was one-over through 12 holes, but dropped three shots at 13 and 14.

Son returned a 77 and she will start the second round tied for seventh with fellow Gauteng junior Samantha Whateley, already a two-time winner this season.

Lucia Mhlabane from Malelane Golf Club birdied the par three 16th on her way to a nine-over 81 to take the top spot in the Silver Division.

The South African Golf Development Board member from Mpumalanga finished two shots clear of Lee-Anne van der Merwe from Boland and she is three shots ahead of Gauteng North’s Jutta Tecklenburg.