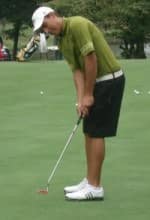 23 year old Matthew Carvell has been awarded the 2008 Men’s Golf Student Athlete of the Year by the Southland Conference, the area in which his Southeastern Louisiana University in Frisco, Texas falls.

Carvell, who is a member of Kyalami Country Club, has had five top ten finishes in the Southland Conference and a stroke average of 73.97 from 13 tournaments. He best performance was at the North Texas / GADO Invitational where he recorded a 54 hole total of 210, six under par, and a best round of 66.

Carvell is studying management at the University.

He was named in the 2007 – 2008 Southland Conference Men’s Golf All-Academic Team, along with fellow South African Michael van de Venter, who is in his first year UT Arlington.