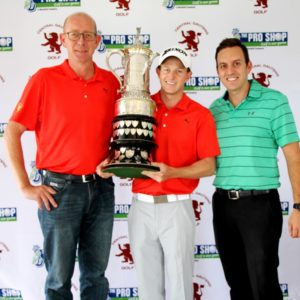 16 March 2018 – Andrew Carlsson made sure that his 25th birthday will be one for the books after he edged out Chris Woollam to lift the Pro Shop Northern Amateur Championship title on Friday.

The Bryanston golfer went toe-to-toe with Woollam from KwaZulu-Natal at Randpark Golf Club and clinched victory at the 37th hole.

Carlsson mowed down Otto van Buynder 5&4 in the first round and beat former SA Mid-Amateur champion Ryan Dreyer 2&1 in round two.

He handed Swiss golfer Neal Woenhard his walking papers with a 5&4 victory in the quarter-finals and earned his spot in the final when he dispatched Casey Jarvis 1-up in the semi-finals.

Woollam defeated Erhard Lambrechts 1-up in round one, edged out Keegan McLachlan 4 & 2 in round two and knocked out Luke Mayo at the 19th hole in the quarters. He booked a date with Carlsson in the 36-hole final when he eliminated Gideon van der Vyfer 1-up in the semis.

The Durban Country Club golfer led Carlsson 2-up after the first loop around the Bushwillow Course, but the Central Gauteng amateur squared the match with a trio of birdies in the first five holes after the turn.

“After a good drive down the middle at the second (20th), I hit my approach long left, but I holed a 15 foot right-to-left downhill slider for birdie to go 1-down,” said Carlsson.

“I hit another good drive down the next hole, and a low cut three-wood just short left. I hit a good bump-and-run to two feet and holed the putt, but Chris also holed his birdie putt. At the fifth (23rd), I chipped it to 10 feet and boxed the birdie putt to square the match.”

“Once again I short-sided myself,” Carlsson said. “I hit a great drive and landed just off the fairway on the right. I had 150 metres into the wind to the flag and went with an 8-iron but I put it in the bunker. I hit the trap-shot to 10 foot but missed the par putt, and we set off for the first tee for a third time.

“My drive finished left and his tee shot ended right. I hit a 3-wood 20 metres short of the green and Chris went with an iron and finished about 18 metres short and left. I chipped to five foot and his chipped rolled out a little, leaving him with a seven-footer for birdie.

“He missed his putt and I holed mine. I was incredibly chuffed with the victory, but I almost felt sorry when it was over. Playing Casey (Jarvis) in the semi-final was really tough. He was four under and just didn’t make any mistakes. I had to hit some great shots to beat him 1-up. Now, after playing Chris, I can see how he reached the Sanlam SA Amateur final. He is a phenomenal player and shot-maker and it was one of the most incredible matches of my career.

“I have to say that I’ve learned an incredibly amount about course management competing in the Race to Q-School on the IGT Challenge Tour this season. I used play too conservatively, but I’ve learned to hit more aggressive shots without taking unnecessary risks and this victory is definitely down to how I managed my game over the five matches.

“I couldn’t have asked for a better way to celebrate my birthday. I am really grateful to Central Gauteng Golf Union and Bryanston Country Club for their support and I would like to applaud The Pro Shop for their continued sponsorship of the Northern Amateur. This is such a highly regarded tournament and I’m really proud to be the 2018 champion.”