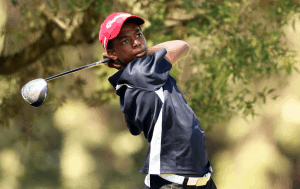 Eagle Canyon’s Carl Mwale scored one of the biggest wins of his young career when he shot 67 to lift his first Bridge Fund Managers Junior Series title on a day of exceptional scoring at Waterkloof Golf Club.

By securing his first Bridge Fund Managers Junior Series title, Mwale qualifies for the regional finals of the 18-event junior golf development initiative sanctioned by GolfRSA. The regional finals will take place in April 2019 and the ultimate prize is an all-expenses paid trip to compete in the prestigious Junior North and South Championship at Pinehurst, USA.

Sixteen-year-old Mwale birdied the final hole for a 5-under-par score and a thrilling one-shot victory over Samuel McKenzie of Royal Johannesburg & Kensington Golf Club. Kiera Floyd of Ebotse Golf and Country Estate was the leading girl and shot 69 to tie third with Nikhil Rama of Bryanston Country Club.

Mwale, who is 14th on the SAGA U17 rankings, is part of the GolfRSA National Squad for 2018/19 – a programme aimed at giving youngsters the best opportunities and resources to fully develop their potential. He was also part of the Curro Aurora (Randburg) team that won the eighth South African High School Championship at Devonvale Golf and Wine Estate in August 2018.

The Bridge Fund Managers Junior Series, which is geared at golf development, launched in July 2017 with 18 tournaments countrywide featuring Under-19 and Under-13 divisions for boys and girls. Endorsed by GolfRSA, the series is managed by Peter Little of the South African Golf Development Board (SAGDB).

“The Bridge Junior Series is all about developing our country’s enormous wealth of young talent, so it is especially rewarding to see a member of the SAGDB get a win and we look forward to hosting Carl at the regional finals in April 2019,” said Paul Stewart, Executive Director at Bridge Fund Managers.

“Carl played superbly to shoot 67 and his birdie to win on the final hole shows he has the temperament to match his undoubted talent.”