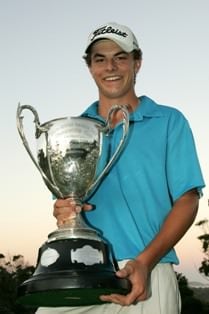 EAST LONDON, 1 March 2010 – England A-Squad member Laurie Canter issued a warning to his South African contemporaries when he broke the deadlock with Allan Versfeld to win the strokeplay qualifier for the Glacier SA Amateur Championship at East London Golf Club on Monday.

Overnight leader Versfeld had signed off on a 71 to set the early target at eight-under-par 138, but Canter, playing in the afternoon field, forced the qualifier into extra time with a four under 69.

The Englishman drained a 20-foot putt for birdie at the first extra hole to collect the coveted Proudfoot Trophy. Joy was written all over his face, but Canter was quick to warn that the real tournament only starts now.

“It’s a real honour to win this trophy,” he said. “I’ve been in South Africa since the end of December but I really struggled to perform in the first couple of tournaments. Now it feels like the hard work is finally paying off.”

The rising Saltford star won several tournaments last season including the Midland Youth Championship, the War Memorial Trophy and the Saltford Salver. After a tie for fifth at the Tilleman Trophy, Canter was called up for England A Squad duty late last year.

“I’m struggling to read the grain here,” admitted Canter, who recently showed is hand with a tie for 12th at the Free State and Northern Cape Open.

“Over the last couple of holes in regular play I lipped out twice so I kind of felt the eighth hole owed me. But that 20-footer in the play-off felt like 50 feet. I’m still shocked that I holed it. Now it’s back to the drawing board for all of us; we are all starting on a clean slate.”

The Glacier SA Amateur is all about match play, which starts in earnest in Tuesday and ends with a 36-hole final on Friday. Versfeld, with almighty drives and well-timed trap shots, remains a firm favourite for the national amateur championship.

Small in stature, but packing tremendous power, the 19-year-old from Country Club Johannesburg bears an uncanny similarity to South Africa’s top professionals, Tim Clark and Richard Sterne, off the tee.

“I never expected to do so well at the SA Amateur,” he said. “I’m disappointed to have lost but this was just the qualifier and the real work starts on Tuesday.”

The leading pair finished two clear of Kwazulu-Natal’s Calvin Pearson, who finished a shot ahead of Jaco Greyling from Heidelberg and Limpopo’s CJ du Plessis on five-under.

Du Plessis rediscovered his sleek iron shots to breeze in with a four-under-par 69 at his home course, while De Kock collected five birdies offset by two dropped shots for a two-under-par 71. The pair tied at four under 142 alongside Ryan Hyde, Aaron Russell, Daniel Hammond and 2009 SA Stroke Play winner, JG Claassen.

Defending champion Ryan Dreyer, who doubled up on 72s to tie for 15th at 142, was joined by current SA Stroke Play champion Dean O’Riley, who bettered his opening 75 by six shots in the second round.