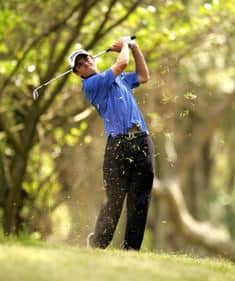 EAST LONDON, 4 March 2010 – On Monday they met in a play-off for the stroke play qualifier honours, but Englishman Laurie Canter edged out Central Gauteng’s Allan Versfeld at the first extra hole to claim the Proudfoot Trophy.

Now only Dean O’Riley, the country’s top ranked amateur according to the latest SAGA Player Rankings, stands between these two players continuing their rivalry on the golf course.

Now, on opposites sides of the semi-final draw, the pair could meet up again in Friday’s 36 hole final for the 108th Glacier SA Amateur Championship title in East London.

Canter, who ditched Justin Levy, Bryn Flanagan and Cobus Oosthuizen on the way to the quarterfinal, won the first three holes with successive birdies to set up an easy 5 & 4 win over Wesley Baptiste from Kwazulu Natal. Meanwhile Versfeld, who knocked off Ruan de Smidt, Johan Bekker and Jared Harvey, claimed his biggest scalp with a 3 & 1 win over defending champion Ryan Dreyer.

But, before the pair can meet again, Canter will have to edge out South African number one, Dean O’Riley, and Versfveld has to take out Rae Mackie of North Gauteng.

Versfeld was 4-up against Dreyer through 10 holes, but the defending champion fought back to take the 11th and 12th holes and cut the deficit to two. The pair halved the next three holes before Versfeld up-and-downed from the bunker at 17 to win the match. The 19-year-old from Wanderers was pleased at punch to score such a big win.

“Ryan is a great player and going into the game, I didn’t know what to expect,” said Versfeld. “I tried not to make him bigger than he actually is. I knew I just had to stick to my own game and not worry about him. I had a tough game and now I’m just happy to walk away with a win.”

Mackie defeated JG Claasen in the first round of match play and eliminated Michael Hollick, Francesco Delporta and Pearson en route to the semi-final.

“I’ve played against Rae before and I know his game pretty well,” said Versfeld. “He hits it short but pretty straight and he has a solid short game, so we could be out there for a while.”

Canter, who has only dropped four shots in six rounds, has not been taken beyond the 15th hole. He says the key to his game has been accuracy off the tee and keeping the mistakes off his card.

But, said Canter, although he gets it right most time, he should listen to his caddie every now and then. “Lyle (Rowe) is a former top amateur, who turned pro last year. He knows a thing or two and I should have listened to him at the ninth,” explained Canter.

“I was just off the green in the fringe and Lyle was begging me to use my putter. I opted for a chip shot and duffed it, resulting in my fourth bogey for the tournament. I guess the lesson learnt there is sometimes you should trust your caddie a bit more.”

For O’Riley the pressure is really on to stop the cantering Englishman, but the question becks if he has enough steam left?

The reigning SA Stroke Play champion beat Lucas Kyle 2 & 1 in his round one match, won at the 22nd hole against Gert Myburgh and won by two from CJ du Plessis.

Having played 73 holes, O’Riley would need every once of stamina left to take Canter past the 15th hole. Nevertheless, he is a tenacious fighter and could gain the upper hand coming down the home straight.