Can Clark do it for a third time at Durban Country Club? 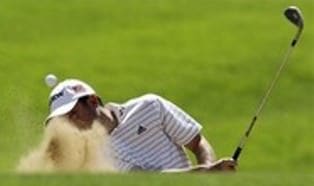 But he’s doing his best not to think about any of it.

“I can’t let myself think about it too much because I’ll put too much pressure on myself then,” Clark said on Tuesday.

With a field including Ernie Els, Retief Goosen, British Open champion Louis Oosthuizen and Charl Schwartzel having gathered for the 100th playing of this championship, which tees off on Thursday, Clark remains the favourite on a course he knows well and where he won the 2002 and 2005 SA Opens.

“It’s amazing how comfortable I feel on this course. I can not have played here for years and when I get out there it all comes back to me.”

And there is certainly no sense that the PGA Tour needs stand back for anybody this week, especially not after his victory in The Players Championship this year.

“There will be pressure on me to win this week because I’ve won the last two played here. But winning The Players Championship has given me a bit more confidence when I get into the situation where a tournament is on the line. I’m no longer intimidated by that situation. I also just want to go out there and have fun. That’s the approach I had in 2002 and 2005.”

“My two wins, and the fact that they were here, close to where I grew up and played golf, are very special to me. I think you can ask any South African player, even the ones with Majors, and they’ll tell you how important this one is because its our home title.

“Winning it a third time here would be great. But I would like to win it elsewhere as well and not be remembered as the guy who could only win at Durban Country Club.”

Clark played his first few practice rounds last week already. While the course has been in the spotlight regarding questions about it being ready in time for the championship following the recent relaying of its greens, Clark was not about to let it concern him too much.

“It’s great to see the tournament back here and I’m excited about it. Obviously there’s been some concern about it being ready in time and with greens having changed. Maybe it’s not as good as it was the last few times the SA Open has been here. But I’m sure they’ve been working hard to get it ready.”

In his preparation, Clark has been paying special attention to sharpening up his driving. “Driving the ball straight here will be the key. On this course it’s all about hitting the fairway and hitting solid shots, especially when the wind blows. I’ve been working hard on that and I feel confident about my game.”