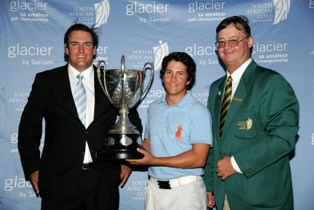 The 22-year-old Calitz posted rounds of 72 and 69 to finish on three under par 141, one stroke clear of Port Elizabeth’s Naldo Claassen and Adrian Ford of Cape Town. Ford added a 75 to his first round 67 while Claassen posted a second consecutive 71.

The top 64 players from the qualifier progressed to the main match play section of the tournament, which tees off on Tuesday.
Welshman Nigel Edwards, the 2006 SA Amateur champion, booked his place with a total of one over 145. South African number one Dylan Frittelli also qualified on two over par, while South African Stroke Play champion Jacques Blaauw made it through on seven over 151.

Calitz started the final round of the qualifier on level par and five shots adrift of Ford’s overnight lead. But despite a strong north easterly wind, the Free State number one managed to produce a round of four birdies and one bogey to top the leaderboard.

“This is definitely one of the highlights of my amateur career. I’m very happy to have won the trophy because I didn’t think I really had a chance. But I played solid and it worked out,” said Calitz, who could surprise some of the favourites in the match play section of the tournament.

Calitz won nine out of his 10 matches at last year’s Inter-Provincial and was instrumental in the combined Free State & Northern Cape team’s victory in the B Section.

“I’m really looking forward to the match play now because I think I’ve got a good chance. I enjoy match play and my game is looking good this week,” he said.

Ford found his game to be in complete contrast with his first round 67. The Ernie Els Foundation member struggled with a golf course playing vastly different with the change in wind.

“I didn’t hit the ball that well and putted badly. I really just scrambled and tried to hang in there because it was a different course from the first day,” he said.