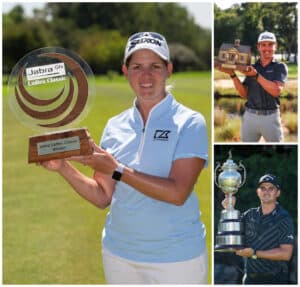 3 July 2021 – South Africa’s top-ranked player Ashleigh Buhai will be representing South Africa in the 2021 Tokyo Olympics after she qualified 33rd on the International Golf Federation list.

Buhai will join the two South African men in the golf competition, Garrick Higgo and Christiaan Bezuidenhout, also named by the SA Sports Confederation and Olympic Committee on Saturday.

Higgo won the Palmetto Championship in South Carolina last month on the back of successive European Tour wins and is ranked inside the current top 40. Bezuidenhout won the Alfred Dunhill Championship and the South African Open back-to-back at the end of 2020 and sits in the top 50 of the Official World Golf Rankings.

The three-time Ladies European Tour winner and 11-time Sunshine Ladies Tour champion – ranked 76th in the world – will be one of two players in the 60-player field from the African continent.

The women’s rankings were finalised after Sunday’s completion of the KPMG Women’s PGA Championship, where 22-year-old American Nelly Korda captured her first major championship to move to number one in the world and top the Olympic rankings.

Both the United States and South Korea lead the way with four qualified players, while none of the other 34 countries represented has more than two.

Lee-Anne Pace, the next highest ranked South African on the Rolex Women’s World Golf Rankings at 209th, will not be travelling to Tokya. Pace, who also opted out of representing South Africa in Rio in 2016, withdrew from qualification, which opened up a spot for Maha Haddioui from Morocco, to compete. Haddioui is ranked 418th in the world.

Paula Reto, who ranks 386th on the Rolex Women’s Golf Rankings, is the next-best South African, but she needs a number of withdrawals to occur before she would get the call-up.

Buhai and Reto represented the country in Rio alongside Jaco van Zyl and Brandon Stone when golf made it’s return to the Olympic calendar for the first time since 1904.

The inaugural men’s golf tournament in 1900 was won by Charles Sands of the USA with scores of 82 and 85. The silver medal went to Great Britain’s Walter Rutherford with another British golfer, David Robertson, collecting the bronze.

Meanwhile American Margaret Abbott was visiting Paris with her mother.

Both ladies entered a nine-hole golf event that they believed to be the Ladies’ Championship of Paris, where Abbott won on a score of 47 and her mother came in seventh. It wasn’t until after Margaret’s death in 1955, aged 78, that it came to light that she was, in fact, the USA’s first female Olympic champion.

Lyon, who did not take up the game until the age of 38, won eight Canadian Amateur Championships. He travelled to London for the 1908 Olympic Games, but a disagreement over the format meant that there were no competitors from the UK and the event was promptly cancelled.

Lyon, as the sole competitor, was offered a second gold medal but declined.

Golf was not included in future Olympic Games until its return 112 years later in Rio de Janeiro.

Similarly, to the 1904 Olympics, a new course was built for the 2016 Olympic Games. Construction of the course was laden with challenges.

On 07h30 on Thursday, August 11, 2016, the Gil Hanse designed course was ready and welcomed the first tee shot of Brazilian, Adilson da Silva and golf’s return to the Olympic Games.

This brought to an end the long reign of Sands, Lyon and Abbot as sole Olympic Champions of golf and heralded the new reign of Britain’s Justin Rose and Inbee Park of Korea as the 2016 champions.