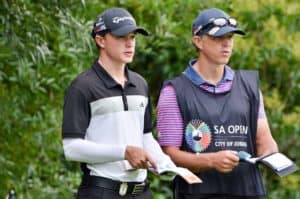 JOHANNESBURG, 9 January 2020 – His GolfRSA National Squad team-mates dubbed him ‘Clutch’ when he won the Junior Players Championship last year, but super-cool Jayden Schaper earned a new nick-name in the press centre on day one of the South African Open Championship, hosted by the City of Joburg.

His uncanny ability to hit a golf ball exactly where he wants to – to shape it so perfectly – quickly earned South Africa’s number one ranked amateur the nick-name “The Shaper“.

“If ever there was a young golfer destined to follow in the spike marks of a Louis Oosthuizen or a Charl Schwartzel, according to the golf writers, this youngster fits the bill,” predict the golf writers.

On Thursday at Randpark Golf Club, playing in his first national Open alongside two of his idols – defending champion Oosthuizen and European Tour winner Christiaan Bezuidenhout – Schaper never once looked intimidated by the big occasion.

Oosthuizen opened with a six-under-par 65 on the Bushwillow course, but “The Schaper” matched the Open champion’s target for a share of 10th on day one.

The pair finished three shots behind American Johannes Veerman , who blitzed the back nine of the Bushwillow course with seven birdies, which added up to a sizzling inward half of just 29 strokes, and a nine-under-par round of 62 for the lead.

Schaper is the first junior in South African golfing history to achieve the ‘grand slam’ of Nomads SA Boys titles, winning the U-13, U-15 and U-17 tournaments and the elusive double at the Nomads SA Boys U-19 Championship as a 16-year-old at Langebaan Golf Club in 2017.

Last year he won the SA Stroke Play Championship, shooting a course record 63 at De Zalze Golf Club en route to victory in the high-ranking international event. And, in addition to five more wins on the GolfRSA Open Amateur circuit, the 18-year-old Benoni golfer became the first South African to win the Junior Players Championship – considered the most prestigious junior golf tournament in the world.

He also qualified on his world ranking, which is 85 at present, for his second successive appearance in the Junior Presidents Cup.

He didn’t only wow the press. Oosthuizen, too, was hugely impressed with Schaper.

“Jayden’s got this wonderful ball flight off the tee with a little cut. A lot of the guys hit high draws for more distance, but what Jayden has is pure class. We’ll be seeing him right at the top in the future.”

Young Schaper responded by saying that just watching Oosthuizen – who his peers reckon has the best swing on tour – helped him with his own rhythm.

Schaper got off to a flying start with back-to-back birdies and drove the green on the 310m par-4 fifth hole, where he drained a 40-footer for an eagle-two. He was five under through the turn after a chip-in birdie on the par-3 eighth and reeled in further birdies on 10, 12 and 17 to eliminate dropped shots on the 11th and 15th holes.

“I’m really happy with the way the round went today,” said the 18-year-old, who plays out of Ebotse Golf and Country Club and is coached by renowned swing guru Grant Veenstra, who also looks after Bezuidenhout, Justin Harding, Richard Sterne and Dean Burmeester, among others.

“I had a bit of nerves on the first tee, but that first birdie settled me down and I felt really calm out there. I’m really happy with the way I managed my game and came back after every bogey.

“It was really great playing with Louis and Christiaan. Louis’ swing is so easy and fluid. I played my own game, but it was great to be up close to watch the way he approached the course. Christiaan is a great friend of mine and we practice together a lot, so to play with both of them in my first SA Open was really special.”

The last amateur to win the SA Open was Denis Hutchinson way back in 1959.

Does Schaper believe, after 61 long years, he can be the next? “We’re all here to try and win, but my goal is just to go out and take things one shot at a time and see what happens,” smiled the teen shyly. His father Ryan, who did bag-duty at the SA Stroke Play, is back on the bag at Randpark, and just perhaps, Team Schaper can make some more history on Sunday.

The State Mines junior enjoyed a meteoric rise in the Open Amateur rankings in 2019, finishing the season ranked second and victory in the Joburg Junior Open at Randpark propelled the 16-year-old to the top spot in the GolfRSA Junior Rankings.

It wasn’t quite the 64 he shot at the Firethorn Course last December, but Jarvis signed for a three-under-par 68 to pull within three shots of Schaper and he will start his second round on the Bushwillow Course six off the pace on Friday.

Jordan Duminy led the Louis Oosthuizen Junior Academy challenge with a 69 on Firethorn.

The reigning Nomads SA Boys U-17 champion tied for 68th with fellow GolfRSA National Squad member Yurav Premlall, who started his second appearance with a 69 on Bushwillow.

Premlall – another Veenstra protégée – holds the record as the youngest amateur at 15 years and five months to qualify for, and make the cut, in SA Open history.

South Africa’s highest ranked amateur and the leading amateur in 2018, Jovan Rebula, opened with a one-under 70 on Firethorn, while former SA Amateur champion Christo Lamprecht posted the same number on the Bushwillow Course.

It was a long day for the 2019 Nomads SA Boys Stroke Play champion Sam Simpson, though, who battled to a six-over 77 in his SA Open debut on the Bushwillow Course.

Written by Grant Winter and Lali Stander for GolfRSA.