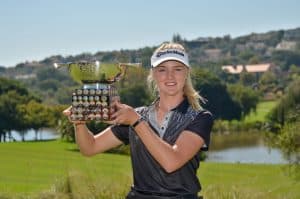 3 May 2019 – Shani Brynard announced her arrival on women’s amateur golf’s biggest stage with a show of superb shot-making to lift the Flight Division title in the South African Women’s Amateur Championship on Friday.

The Boland junior showed the nerves and composure of a true champion to hold off Pheletso Mota at Woodhill Residential Estate and Country Club and win the final 3 & 2.

“It feels amazing,” said the 16 year old GolfRSA B-Squad member.  “It’s a dream come true, especially after I didn’t have a great stroke play championship. “Once we got past the first hole, I played solid golf in the final.

“In this format, if you hit a bad shot, you only lose one hole. You can get it back quickly and I think the mind-set kept me very calm. I had a few wayward moments, but I holed the putts that mattered. It feels really amazing to break through for my first national title at the SA Women’s Amateur.”

Brynard – but her own admission – was her own worst enemy during the 54-hole stroke play tournament, but she found her stride in the match play event.

“I just didn’t play my own game in the stroke play,” said the Grade 11 Rhenish Girls High leaner.

“I played the scores, not the course and at a challenging layout like this it will cost you. Once we started the match play, I played my own game.

“I also started to come to grips with the course after three rounds. The greens were really hard and I realised I had to club down at least two clubs on the downhill holes. I think understanding the course added to my comfort level during the match play.”

Brynard won her first match against Gloria Mbaguta 5 & 4 and defeated Lauren Clough from Gauteng 3 & 1 to reach the quarterfinals. 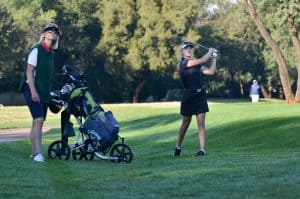 “My sister Ineke also made the quarters and we were starting to think we might have to play each other in the final,” said Brynard. “I played my best golf on day one and took that confidence to beat Tebogo Letifi 6 & 4 in the quarter-finals.”

The younger sibling lost 6 & 4 to defending champion Lizzie Currie from KwaZulu-Natal, but with mom Narette on the bag and dad Quinton and her sister supporting from the sidelines, Brynard routed fellow Boland golfer Lynne Behagg 8 & 7 to set a date with Mota for the title fight.

Mota, a member of the GolfRSA Talent Identification Squad, beat Petrone Rudolph 5 & 4 in round one, eliminated Isabella van Rooyen 2 & 1 in the second round and reached the semi-finals after knocking out Eva Magala from Uganda 7 & 5.

Both finalists made a nervy starts and stumbled out of the blocks with a bogey start, but while Brynard settled down quickly, Mota continued to struggle.

She double bogeyed the second and had back-to-back bogeys at the seventh and eighth as Brynard reeled off eight straight pars to turn 3-up. The Boland golfer extended her lead with a birdie at the par five 11th and went 5-up when Mota surrendered another shot at the short 12th.

“The 12th hole was the game-changer, because I should have lost it,” Brynard said. “I overshot the green and chipped it five metres past the hole, but I boxed a hallelujah uphill putt to win the hole. At 13, I hit my tee shot down the middle of the fairway, but my approach pitched the green and rolled into the bunker. With the water on the other side, I was too apprehensive and the bunker shot landed back in the sand.”
Mota hit her second stiff at the 15 and won the hole with a birdie to cut Brynard’s lead to three shots, but it was game over when the pair halved the short 16th in bogeys. 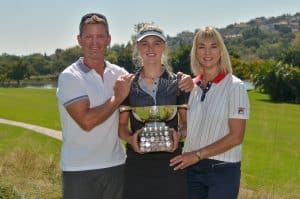 ”It was an up-and-down week with highs and lows but Ineke and I learned so much and we really enjoyed the chance to play against the best amateurs in the country,” Brynard said.

“It was absolutely amazing. I’m very proud of the fact that I kept it together and played sensibly over the last couple of holes.

“I’m so delighted to have closed it out. My parents did a great job this week keeping me in the zone and it was really special to share this with victory with my whole family.”