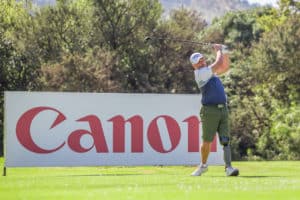 English leg-amputee Mike Browne made a great start to his title defence in the 21st Canon South African Disabled Golf Open with a share of the first round lead at Magalies Park Country Club; credit Tyrone Winfield.

13 May 2019 – Mike Browne’s title defence in the Canon South African Disabled Golf Open got off to a solid start as the Englishman carded a two-under-par 70 to share the first round lead at Magalies Park Country Club on Monday.

The 41-year-old former Royal Artillery gunner reeled in a hat-trick of birdies to match the opening score of seasoned Australian veteran and fellow leg-amputee Geoff Nicholas.

Browne went wire-to-wire to capture the title in his first disabled championship start a year ago and, with the introduction of official world ranking points for golfers with disabilities this season, the Englishman is keen to double up in the 21st edition of the flagship event.

“I had already decided to come back to defend, but when the world rankings were announced it raised the bar even higher,” said the United Kingdom’s first amputee pro golfer.

“Over the last year, I split my time between the TP Tour in England and the Florida Pro Golf Tour in the United States. I’ve also played the qualifying schools in Europe to gain experience and the qualifiers for the Challenge Tour. The dream is still to compete on one of the main Tours and competing abroad on different courses and conditions helps me to build experience.”

Brown only took up golf six years ago after losing his right leg below the knee while serving in the military. He got his handicap of 28 within two years and enjoyed a storied amateur career. He turned professional on the advice of former Ryder Cup captain Mark James and currently plays off scratch.

Last August, he smashed the world record with a drive of 564 yards (515 metres) during a long drive competition on the runway at RAF Honington in Suffolk and he used that distance to great effect at Magalies Park to capitalise at two of the par fives on the homeward loop.

“I was one-over through the turn, but I birdied 13 to get back to level par. I stuck it close on 14 and boxed the putt to get into red numbers for the first time. The 18th is quite long; about 550 yards. I went for it in two, and almost made eagle, but the putt lipped out,” said Browne.

“The course is in great nick and the greens are fast, especially the downhill putts. I expect it will get even faster as the tournament goes on, so it was nice to finish off with a birdie and make a half-decent start.”

Playing partner Nicholas also lived up to his star billing.

The New South Wales golfer won the British and United States Amputee Opens a record 13 times and added to his trophy cabinet with success in Canada, New Zealand, Sweden and Japan. He even had a stint on the Australasian Tour and, in 2014, won the only World Cup of Disabled Golf for Australia with compatriot Shane Luke right here in South Africa. 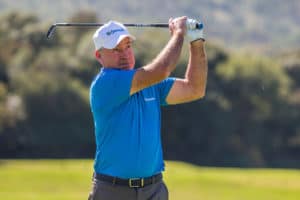 Nicholas arrived in South Africa with some hot form, coming off victory in the Queensland Open – the first event that counted for world ranking points.

“I was still a bit jet-lagged, so the ball striking wasn’t great, but I putted really well,” said the 57-year-old from Sydney.

“I hit a good 8-iron into the first green and sunk a 25-footer for birdie. I sunk a good downhill putt at six, but I three-putted bogey at eight. I got it back to two-under with birdie at 14, but dropped another shot at 16. I hit it in the bunker, and missed an eight-footer for par. I laid up at 18 and hit a good third in and drained the birdie putt.

“It’s great to be back in South Africa and this place is beautiful. The weather is glorious, too. The course isn’t too long, but the greens are tough. They are running around 10.5, so the pace is good.” 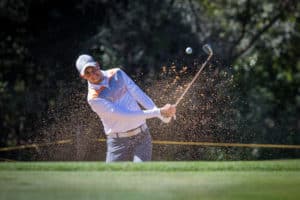 In his last appearance in the Canon South African Disabled Golf Open in 2016, Theron tied for fourth, but golf had to take a back-seat while the De Zalze golfer studied a B-Accounting degree at Stellenbosch University.

The country’s leading disabled golfer was thrilled to be competing again at the highest level, but he was not overly pleased with his opening effort.

“I guess it was nerves, but I was six over after four holes and that really rattled me,” admitted the 21-year-old B-Acc Honours student. “I managed to stem the bleeding and had a much better back nine, but I’m seven shots back, so it’s going to take two low rounds to catch Mike and Geoff.

“Hopefully I got most of the rust off. The ball-striking was good and the putter warmed up on the back nine. It was great to finish with a birdie and hopefully I can keep it going.”

The Clovelly golfer was equally frustrated to be on the back foot after an opening 77. “I played solid, steady golf, and I was in a decent position after 14 holes, but I let four shots slip over the closing holes,” Grobbelaar said. “It will be tough to make up seven shots at this course, but I’m up for it. I will have to take advantage of the par fives, though, and warm the putter up.”

Shelvin Kraemer from Mount Edgecombe posted 37 points to edge out English pair Graeme Mazur and Ian Jones by six points for the lead in the IPS Stableford Division for handicaps 18-5 and over.