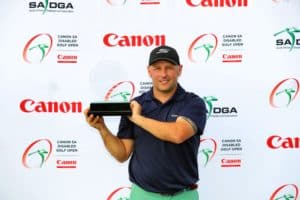 16 May 2018 – Former British soldier Mike Browne showed the nerves and composure of a true champion when he claimed a breakthrough victory in wire-to-wire style at the Canon South African Disabled Golf Open on Wednesday.

Competing in first disabled championship, the 38-year-old leg-amputee from England carded successive rounds of 78 to head into the final round at the Magalies Park Golf Club with a 10 shot lead over former two-time champion Iglin Grobberlaar.

Browne let a few shots slip during the round, but his magic touch around the greens netted him a birdie at 17 and he parred the final hole for a four-over-par 76 to close out a 12 shot victory on 232.

“This is fantastic,” said the elated winner. “It’s pretty cool to be one-for-one in victories. I was apprehensive when I came out to South Africa, because I’ve never played in a disabled tournament before but I had an absolutely amazing time.

“I gained so much more from this experience than just the trophy. I’ve played against other amputees before, but here I met people with disabilities I’ve never seen before. They competed just as hard as I did and it was heart-warming to see their enthusiasm and spirit.

“I was especially impressed with the kids I met from the First Swing Programme. To hear their stories and to watch see them compete was a very humbling experience. I feel incredibly honoured to be the champion of this tournament. I’ve said it before this week; any disabled person who loves golf should try to play in this championship.”

Brown didn’t have the greatest starts, but playing the pro circuit for the last 18 months has taught the scratch golfer to never give up.

“I hit a 4-iron off the tee and 8-iron in, but it flew the green and hit the road at the back,” said Browne. “I got the two shots back with birdies at three and five. Then I made another double when I put it in the bunker at six. My trap shot hit a tree, I finished dead behind another tree and had to chip out. I turned two over, and had bogeys at 12 15 and 16, but I nearly eagled 17. I hit 5-wood and the ball pitched on the green and rolled off the back. I had about 35 foot to the pin and nearly holed it.”

Browne hit it close again on 18, but the birdie putt shaved the hole, leaving him a tap pin for par and victory.

Grobberlaar and Daniel Slabbert both posted final rounds of 78, but the Clovelly golfer edged out four-time champion Slabbert by one stroke for second on 244. Grobberlaar also won the Les Autrés Medal Competition, edging out 19-year-old Ignation Douries for the victory.

Hernan Garcia from Chile finished fourth overall on 248 and lifted the Arm-Amputee Medal title with rounds of 89, 82 and 77.

Double leg-amputee James Hourigan from Ireland closed with a 79 to round out the top five on 251.

First Swing Programme coaches, Daren Hanekom and Charles Williams had to put their friendship on ice as they challenged for the Deaf Medal Competition title. Williams won the race with a final round 87 to triumph on 258.